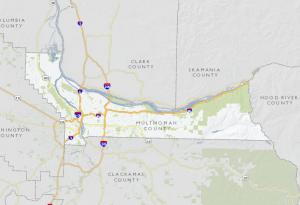 Clicking on the map will open a new window.

The County and Library District provide general services to the broad community of County residents. For example, the Library operates regional and neighborhood libraries across the County and offers a variety of services to all residents. Public safety services are also designed to benefit all County residents. However, the County’s public safety programs are generally targeted at very specific populations within the County: those that have interacted directly with the justice system, such as inmates, parolees and people on probation.

General government and public safety programs use a mix of County and contracted staff to provide services.  Within public safety programs in our sample, the Neighborhood District Attorney (Neighborhood DA) program provides services directly, while the Department of Community Justice (DCJ) primarily contracts with providers to deliver services to offenders and their families. We did not map the locations of services under DCJ, given the referral process for entry into these services.

We did map the Elections Division’s official ballot drop boxes and Library branch locations to ascertain how well they matched the distribution of the County’s population. And, we mapped Library cardholders who used their cards at least once in FY 2014. We found that the distribution of official ballot drop boxes and Library locations were generally a good fit with how the County’s population is distributed. However, this distribution was not reflected among the majority of individuals who used Library cards in FY 2014; this population was more centralized within the County.

Resources available for Neighborhood DA offices are the primary barrier to the growth of the program.  Direct contributions from non-County organizations, such as the Lloyd District, have an impact on the location of these offices.

Read about physical and mental health services, and explore them with interactive maps.

Read about human services, and explore them with interactive maps.

An overview of County service provision, programs in the audit scope, methodology and data sources.

Introduction to and results of the Auditor's report examining the extent to which County service distribution has been equitable.