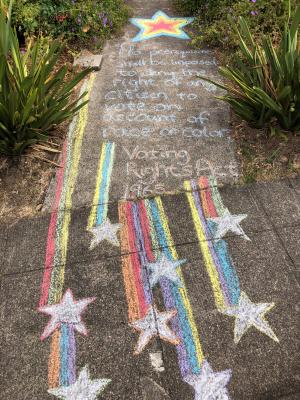 August is the 100th anniversary of the 19th Amendment. Theoretically, passage of that amendment gave all women the right to vote. But the reality was that women and men of color would continue to face strong barriers created to prevent them from exercising that right. Things like poll taxes and literacy tests, as well as lynchings.

Like most things in American history, you aren’t telling the whole story of the passage of the 19th Amendment if you don’t talk about the racism inherent in that process. A recent NPR news story does a good job of laying out what happened. For example, the article shares the following, which in part discusses white women’s displeasure that Black men had earned the right to vote (through the 15th Amendment) before them:

“In 1918, leading suffragist Carrie Chapman Catt framed the argument this way in a letter to North Carolina Congressman Edwin Webb, trying to persuade him to vote yes on the 19th amendment:[The] present condition in the South makes sovereigns of some negro men, while all white women are their subjects. These are sad but solemn truths. If you want white supremacy, why not have it constitutionally, honorably? The Federal Amendment offers the way.”

We are fortunate in Oregon because we can vote by mail, and we don’t have to pay for postage when we mail in our ballots. If you aren’t registered to vote, or if you aren’t sure if your registration is up to date, please visit the Oregon Secretary of State’s voting website.

You must be registered to vote by October 13, 2020 to vote in the November 3, 2020 election for local offices and measures, and for U.S. President. Please vote. Please encourage your friends and family to vote. Vote as soon as you get your ballot, and return it promptly.

Participate in the U.S. Census

Make your voice heard and help your community by participating in the U.S. Census. The federal government is ending the census earlier than expected, with the census now ending on 9/30/20. If you haven’t completed it yet, it only takes a few minutes online. You can take it here.

On August 8th, I attended a virtual listening session on justice system reform. East County Rising and Play-Grow-Learn sponsored the session, which was moderated by Ricardo Lujan of the Latino Network. The panelists were County Commissioner Lori Stegmann, Reynolds School Board Member Ricki Ruiz, State Representative Chris Gorsek, District Attorney Mike Schmidt, and Gresham City Councilor Eddy Morales.  About 70 community members participated in the listening session. People shared personal, important stories about their interactions, or their loved ones' interactions, with the criminal justice system. Issues came up that were directly related to our in-process audit of jail conditions – things like costs associated with the telecommunications necessary for family to keep in touch with loved ones while they are incarcerated, cash bail, and pretrial incarceration. I am grateful I had the opportunity to listen in to the conversation and learn from our community members.