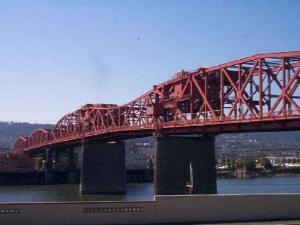 The anchor strut replacement and operating strut rehabilitation on the Broadway Bridge represent the latest in a series of projects to upgrade the northern most bridge over the Willamette River in the downtown area maintained by Multnomah County. Built in 1911, the Broadway has undergone many upgrades during its 90-year lifespan, including the replacement of it's original bascule span timber deck and the passing of street cars. Recently the County completed renovation of the Broadway west approach with new sidewalks and streetlights. The City of Portland is nearing completion of a new Lovejoy Ramp. Future projects will include the rehabilitation of the bridge machinery in the west Machinery House, replacement of the span locks, installation of centering devices, replacement of the roadway deck and sidewalks and a partial repainting of the main structure. These projects reflect the first major rehabilitation for the bridge in the last thirty years

There are two major features of this project: the replacement of the anchor struts and the rehabilitation of the operating struts. The anchor struts (shown above on the left) bear the weight of the lift span leaves when the bridge is closed and partially supports them during openings. The newly arrived anchor struts (above center) for the east end are unloaded from their transport and set upon the bridge approach. After removal of the old strut, the new struts were carefully lifted and aligned in place on the bridge. Though a slow process at first, the crews were able to install the remaining three anchor struts without much difficulty, finishing well within the allotted time.

The operating struts are connected to the bridge's machinery and pull the bridge open when required for ships to pass. The old pins were removed and replaced with new pins, shown on the right being hoisted into place.

The work has been awarded to Christie Constructors, the same company that replaced the trunnions on the I-5 lift spans near Vancouver. The construction contract is for $1.23 million dollars. Shop work and fabrication are underway. On-site work was begun to prepare the components for removal. This project required several closures of the bridge to vehicle traffic as the arms were removed and installed and the bridge was balanced and tested. For this reason, the bridge was closed to all traffic for 26 days beginning January 27, 2002. Press releases were prepared and sent out in advance. The entire project took about three months to complete.

County engineers and a consultant opted to complete the repairs before 2003, when a major renovation and painting program for the bridge will begin. Reliable operation of the lift span will help ensure that next year's project stays on schedule.

On January 27, 2002 the bridge was closed to motor vehicles, bicycles, and pedestrians. Most motor vehicle traffic was shifted to the Fremont, Steel and Burnside bridges. The easiest detour for most bicyclists and pedestrians is the Steel Bridge. The traffic plan included the following elements:

Multnomah County owns and maintains more than 300 miles of roads and bridges, including the Broadway Bridge.

For the most current information on traffic changes for this project, check the Transportation Division's new releases page for the Willamette River Bridges. For information on other projects in the Portland area, check out Keep Portland Moving.