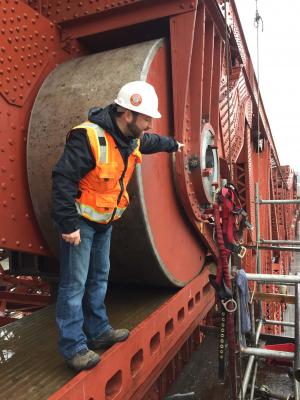 Project manager with new Broadway Bridge Rall wheel and track
After more than a century of use, the eight-foot diameter steel wheels that help open and close the Broadway Bridge were replaced in 2017. Related repairs will be completed in 2018.

The Broadway is a rare type of bridge- a Rall-wheel double-leaf drawbridge. It uses four large steel wheels to roll back and engage larger weights that lift its two center spans. Each cast wheel weighs more than 56,000 pounds. The new wheels made of solid steel each weigh 82,000 pounds. It’s a complicated design, but it opens faster and uses less energy than other bridges of its era. It also allows ships of any height to pass.

The four old Rall wheels were in use since the bridge opened in 1913. After more than a century of hard work, the wheels and their tracks were worn out and had to be replaced.

Replacing the Rall wheels was a very complex project. The Rall wheels support the entire weight of the opening spans- 2250 tons each. This means the work could only happen when the spans were closed. In order to allow river traffic to pass, one span was free to lift while the other was repaired. Then the contractor switched sides to work on the other lift span leaf. Replacing the wheels took about three months for each side.

In order to work quickly and efficiently, Multnomah County hired a consultant team that included both engineering and construction skills. Designers Hardesty & Hanover, LLC, worked with contractor Hamilton Construction to plan and create the best approach to fixing the bridge. The estimated construction cost for the project is $12 million.

30,000 vehicles cross the Broadway’s four lanes every day, as well as 2,000 bicycles, a streetcar line, a bus route, and many people on foot. The bridge is an important connection between the Pearl District, Rose Quarter and lower NE Broadway area.

Repair work was planned to reduce impacts to traffic while keeping the drawbridge operating so large ocean-going vessels could pass.

One center traffic lane remained open each way during most of the Rall wheel work.  The contractor could hold traffic up to 15 minutes outside of peak commute times, such as when heavy items needed to be moved over traffic lanes.

At most times, both sidewalks were open at full width. Streetcars and buses were able to use the bridge. However, there were times (on nights and weekends) where the bridge was closed to all traffic.

Some night work was needed, mostly to set up a new work area. We took a number of steps to be respectful of our neighbors:

The project received a noise variance from the City of Portland to do work on some nights, to minimize traffic impacts on commuters.