Following through on a commitment to diversity and equity

The County and the general contractor for the project, Hoffman Construction, set specific diversity and equity goals and built a diverse team of subcontractors.

Multnomah County values and respects diversity within its workforce, clients, contractors and the community. We worked to advance cultural diversity and social equity in the workforce constructing the new Central Courthouse. 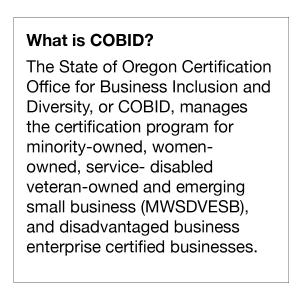 The County and the general contractor for the project, Hoffman Construction, set specific diversity and equity goals and built a diverse team of subcontractors. On a monthly basis the project tracked progress toward these goals for the firms, individual professionals and apprentices working on the project.

Multnomah County and Hoffman Construction had a goal of awarding a minimum of 20 percent of the contract value to COBID certified firms, exceeding the County’s aspirational goal of 15 percent. The construction team surpassed the goal using active outreach, mentoring and networking. Successful partnerships between small and large firms have formed to build a diverse project team.

Hoffman Construction Project Manager, Justin Paterson, works with the County and equity program consultant, Faye Burch, to reach out to COBID certified firms. Paterson said seeing some of these certified subcontractors, especially minority-owned firms, get their first opportunity to work on a really important building project was a huge success. “Some subs are doing new and bigger things than they’ve ever done – stretching their skills.”

Marcella Alcantar is an entrepreneur who learned new skills, changed her profession and opened her own construction installation business after encountering barriers in the engineering field. Ms. Alcantar learned about the courthouse project from attending an open house event and decided to put in a bid.

“I’m new in construction and cautious in the bid process,” she said. “Hoffman has helped me understand the process.” Alcantar Associates began their work on the project in March 2019.

Diversity dashboards track progress toward diversity and equity goals for the Central Courthouse Project. The dashboards are compiled monthly based on reports from subcontractors and submitted to the County’s compliance team. New dashboards are reviewed prior to publishing to allow the contractors to provide their input and ensure accuracy.  Here is the most recent Diversity Dashboard for the project, from August 2020:  Central Courthouse Diversity Dashboard, August 2020 (7.82 MB)

Challenges, lessons learned and next steps

The project team is proud of the successes achieved in recruiting, contracting, and mentoring COBID-certified firms and a diverse contractor workforce. The project shares its stories with other agencies and groups. The team worked to meet goals and understood there is more progress to be made, particularly toward goals for female apprenticeship overall as well as in minority male and female apprenticeship by trade in some trades. The Labor Management Community Oversight Committee, formed as part of our Project Labor Agreement (PLA), works hard to identify and overcome key barriers to building diversity in our construction workforce and contracting community. The community includes representatives from the County, general contractor, trade unions and programs that support new apprentices entering the building trades.

Posting our dashboards on the County website allows the community to track progress over the coming years as well. As a result of the success on the Courthouse project, many public agencies are looking at our project labor agreement as a model for how to build diversity on a construction project.

The success of the Green Dot bystander intervention program has also led agencies and private firms to investigate how they can implement the program on their next project to create a jobsite culture intolerant of violence and harassment.

Multnomah County and Hoffman Construction worked with subcontractors and pre-apprenticeship programs on recruitment, training and retention of women and minority workers across trades and fostered a welcoming and safe workplace environment where workers and emerging firms had opportunities to grow and succeed.

View the latest diversity dashboard for all the reporting metrics:

The Central Courthouse project benefited the COBID-certified business community and construction industry culture in the Portland region. The connections forged by the subcontractors and trade partners will carry through to other projects as firms get to know each other and work together.

To help meet equity and diversity goals and effectively build a diverse contractor workforce, the project first identified a list of interested companies. Hoffman Construction kept them informed and followed up when services were needed.

To help meet equity and diversity goals and effectively build a diverse contractor workforce, the project first identified a list of interested companies

Multnomah County and Hoffman Construction also worked together to identify the tasks best suited for COBID-certified businesses in areas that were within firms’ capacities and could lead to future work. Hoffman carved out some scopes of work that were particularly appropriate for COBID-certified firms.

“It’s a lot of guidance,” remarked Abdias Calixte, owner of Complete Fusion Welding, a COBID-certified business on how the courthouse project helped grow his business. “It would be impossible to grow as fast as I grew without it. The exposure means everything. Now people know me and know what I’m capable of doing. I have the proven record that I can do it, and can do future work of this size.”

A culture of support and respect

The Central Courthouse project used the Green Dot bystander intervention program to create a culture of allies that is intolerant of violence and harassment on the jobsite.

The program was originally developed to address harassment and assault on college campuses and military hazing. At the Central Courthouse jobsite, the program was oriented to the trades and created a safer and more welcoming environment for everyone.

The Green Dot program provided training and curriculum to prepare construction crew members to call out harassment when they see it, giving bystanders tools to respond to things they witness.

On the job training, apprenticeships, and small firm mentoring provided through the Central Courthouse project helped develop the local workforce.

Since growing up in Haiti, Calixte has always wanted to build. He went to Lower Columbia College and earned an associate’s degree in welding. He later became a fabrication inspector and then joined the boilermaker’s union to repair ships and expand his expertise before joining the pipefitting union.

Calixte was inspired to start his own business because he wanted to provide superior service. He’s thankful for the support available through the Central Courthouse Project. Through the project’s diversity program he was able to find a bookkeeper to keep the back office in order and ensure his company submits invoices and gets paid on time.

The construction management and support provided to subcontractors have helped him expand his firm’s capacity. Calixte’s business goals include continuing to grow and eventually generating $5 million in revenue annually. He envisions hiring additional support for bookkeeping and payroll as he expands his business in the future.

Opportunities exist for people as young as 18 years old. Prospective candidates can have a high school diploma or a GED and can enter the field through pre-apprenticeship programs.