Barbara Earl Thomas, an African American artist from Seattle, Washington, has work that encompasses a variety of mediums, from egg tempera and paper cutting to sculpture, often with the intention of carrying a narrative.

Thomas’ most recent imagery on the steel exterior panels of the new Multnomah County Central Courthouse building that opened in October 2020 is no different. 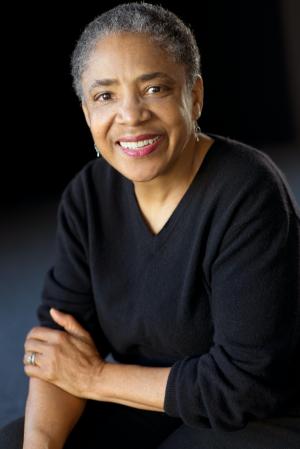 Her 33-panel graphics on the outside of the building utilize both abstract and realistic techniques to depict a representative history of Multnomah County.  The panels were funded by the County’s percent for art ordinance that applies to construction of county facilities.

Thomas has been a “maker” for as long as she can remember. “I’ve always liked to build things,” she says. “As long as I can remember I was building things. I was building forts, had trains, had model airplanes, had painting kits and all of that, and I just like to make things.”

Thomas says her family was the same way. From a young age her parents, who moved to the Pacific Northwest from the South, instilled the value of creating and decorating things in their house. Thomas remembers spending hours with her mom embroidering pillowcases and quilts.

“It wasn’t about ‘Oh this is gonna be in a museum,’” she says. “It was about adorning your living space and making something that might not have been so visually beautiful more beautiful. The beautiful teacup, the beautiful plate, the beautiful tapestry tells a story and serves a function, and it also acts as a visual enrichment.”

Highly regarded in her field, Thomas’ work has been showcased in galleries including the Seattle Art Museum and others across the country. Below are excerpts of a conversation with Thomas about her work on the new courthouse. The interview has been condensed and edited for clarity.

Walk me through how you got the job to do the panels.

I was approached for the project by the Regional Arts & Culture Council (RACC) through (Project Manager) Peggy Kendellen. Actually, I was kind of surprised by the whole thing. I made a proposal and I think I was one of three, and I was selected of the three.

Barbara Earl Thomas' steel murals depict the places of Multnomah County.
How did you decide what exactly to include in the panels?

I came to Portland before the pandemic, when you could hang out with people and drive around. I took a couple of tours around the county and I went with one of the members of RACC and she showed me things that she thought were important. I took notes and I read and talked to people about the panels. Then I started making lists of the things that I saw.

There’s sort of a loose theme of this car, and this mystery driver is leaving his home and driving around Multnomah County and kind of running into these sort of otherworldly things.

So he goes over the bridges, because there’s so many bridges in Portland and Multnomah County. Then he ends up in the past, he ends up in Rockwood, which is a school that does not exist anymore, but it is definitely something that is iconic. I said, “Let me put something in that probably doesn’t exist anymore, but it will be sort of a nod to a past that lots of people will know about.”

Then he leaves Rockwood and goes back to the present. And then there’s frames of a farm. We got cows and chickens together. I had to work really hard on the cows because I had never really drawn a cow. My cows kept looking like dogs because my neighbors have so many dogs, so I drew their dogs.

And then the last two windows are actually tulips that are up at the top and they are intersected by a railing. There’s this whole idea of the tulip and how it symbolizes hope and beauty.

It’s not in every single panel, but in most of the panels you’ll be able to find that car coming or going out of the visual plane so I thought it would be interesting. There’s some kind of playful things because I don’t think everything has to be heavy, and you know, we’ve got enough heavy stuff we’re dealing with every day, so I feel like it’s a balance to that.

Also I thought about the fact that these panels are not only going to be shown for a year or six months. So what’s going to be interesting in six years and still visually engaging? That was another thing that was in my mind: not making it tied to one local event so tightly.

Most of the things in the panel are real except the one that says “leaving home.” Home is so different for so many different people, and especially right now we have a lot of homelessness, so I didn’t want to talk about everybody coming from their nice little house — everybody doesn’t come from a nice little house. Some people are living rough, some people are living semi-rough, but it doesn’t mean that the beauty of the world doesn’t belong to them because they don’t have what everyone else has.

Steel mural on exterior of the Central Courthouse depicts the bridges of Multnomah County.
I noticed especially that your style is very creative, but also tells the narrative very well. How did you go about balancing the creative themes while telling a narrative?

So I did both of those things and tried to balance it. That was kind of my rule of thumb. I had 33 opportunities, because there are 33 images around the building. And so that might seem like a lot, but when you’re trying to tell a story that has so much geography in it, you just are going to leave something out and you’ve just got to live with it. I couldn’t put in everything so I tried to put in things that seemed like people could at least relate to even if it wasn’t in their particular neighborhood.

But I did include things about various communities and neighborhoods, which means it's not exhaustive, but it is representative, which was something I was trying to do. Multnomah County is like America in that it has a variety of kinds of people and food and places and history, and they’re all sort of flowing together and I think if you look at the work you’ll see there’s lots of movement.

I feel like my work really is a metaphor for the fact that nothing stays the same. Things are always changing, they’re moving out of one thing and into another, so that’s the motif that runs in all of the courthouse pieces, whether they are historic or they are about a specific landscape or a specific event or neighborhood.

In a broader sense, why do you feel it’s important to have art in public spaces like courthouses?

I think to humanize the space. So I wanted to have multiple kinds of visual experiences for people. I thought also if you’re there and you’re with kids, and you’re walking around outside, visually I wanted it to be engaging and stimulating. I mean a lot of the panels are actually super life-sized because some of them are 13 feet tall and seven feet wide. But at the same time, if you step back and look at them, they’re something that represents the world and county, and they’re not alien experiences.

You originally designed these graphics as paper-cuts. How did you make that decision?

I do a number of different outputs and I could’ve sat down and drawn each one, but it seemed like not the best since I have this [steel paneling] skill. I thought the best direct translation would be to make something that would translate more closely. So I think that’s part of it: I did a lot of editing so it was a very intense process.