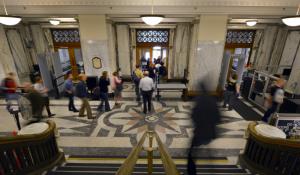 Multnomah County is well on its way to replacing the Central Courthouse.

The current courthouse, located on Southwest 4th Avenue in downtown Portland, was built between 1909 and 1914. Today, it is both structurally and functionally obsolete. The building does not meet current seismic codes, is overcrowded and presents serious safety concerns for the public due to poor separation of criminal defendants from judges, witnesses and court personnel.

The Multnomah County Board of Commissioners will make decisions in the months ahead about the new courthouse’s location, look and functions. This community survey will help the board inform its key decisions.

Thank you in advance for participating. You are helping us build a Central Courthouse that will serve Multnomah County for decades to come.