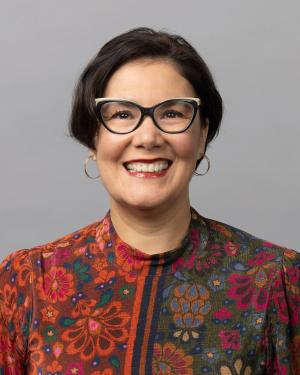 As Chair of Multnomah County, Jessica Vega Pederson is a proud representative of the state’s largest and most populous county, and among its most diverse. She serves as Chief Executive Officer of Multnomah County, a position overseeing a $3.3 billion budget that provides the largest safety net government in Oregon. Under Chair Vega Pederson’s leadership, the County supports residents across a range of services.

Chair Vega Pederson works in partnership with community partners to help set the County’s strategic policy directions and priorities with a focus on equity and collaboration. She also works closely with the Board of County Commissioners, other governments, and the community at large to implement, advocate for and sustain high-quality, reflective and representative services for all Multnomah County residents

A proud resident of East Portland for nearly two decades, Jessica Vega Pederson was raised in Northwest Indiana among her large, loving Mexican-American family. Following the lead of her mother who was a local activist for civil rights, she became involved in advocacy in high school.  After a racially-charged incident involving the school football team took place during her senior year in high school, Jessica and her sister started a student group to promote a better understanding of the experience of students of color. This work led her to a summer program in Washington, D.C. where she studied the power of government in shaping people’s lives. Jessica continued working on issues impacting Latinos, students, and the environment during student government work in college.

Frustrated by the pressing challenges in her east Portland neighborhood and seeking to expand opportunities for working women to thrive, Jessica ran for the Oregon Legislature because she wanted to do more than talk about making things better. When elected in 2012, Jessica became the first Latina to serve in the Oregon House of Representatives. In the legislature, Jessica fought for issues such as paid sick leave, pay equity, and raising the minimum wage to improve the lives of women and working families in Oregon. As chair of the House Energy and Environment Committee she championed the renewal of the Clean Fuels Program and passage of a bill to remove coal from Oregon's energy mix, two ground-breaking laws to create jobs and address the sources of climate change. For her work, she was awarded the national Sierra Club’s 2015 Distinguished Achievement Award.

Jessica has led the County’s efforts to combat climate change and improve our transportation system, in work on the Portland Children’s Levy Allocation Committee  and  represented the County at various regional transportation tables, including leading the effort to build a new, earthquake-resilient Burnside Bridge.

Jessica lives in the Hazelwood neighborhood of Portland with her husband Aaron and their two children. When she is not working for the people of Multnomah County, Jessica loves to explore the beauty of Oregon with her family. Contact Commissioner Vega Pederson’s office by phone at 503-988-3308 or email at mult.chair@multco.us

Learn about board meetings, sign up to testify or submit testimony, and watch meetings. The Board considers and votes on County business on Thursdays at 9:30 a.m. Briefings are held on Tuesdays at 10.

Every year, the Joint Office of Homeless Services and its partners help thousands of people end their homelessness by moving them into homes of their own while also offering many more support services

Chair Jessica Vega Pederson describes who she is and why she ran to serve as Multnomah County Chair.