For this month’s constituent spotlight, I spoke with Alex Chiu and Rodolfo Redstone Serna, two of the muralists who designed and painted the mural, titled Restoration, on the side of the Department of Community Justice east campus. If you haven’t seen this mural, in person, I recommend a visit to the Mill Park neighborhood to see the larger-than-life painting. We discussed the elements of design in the mural and the impact that public art has in our community’s healing process. I appreciate Alex and Rodolfo for taking time to explain the process of creating this mural and promote Portland’s public art scene. (The third contributor and artists of this mural, Mehran "Eatcho' Heard, couldn't be reached for the interview.)

Please share a bit about yourself and how you became involved in Portland’s art scene.

Rodolfo Redstone Serna (RRS): I started as a mentor working with youth and art was always a method I used to engage the youth. In college I met Portland mural artist Isaaka Shamsudin and from his class I began crafting my own process for how to engage community through art.

Alex Chiu (AC): My name is Alex Chiu.  I have been living and working in Portland as an artist since 2012.  I originally moved here because of the independent comic book and zine culture in Portland.   I became a full time muralist in 2017 after working with Trimet on a mural project for the 82nd Ave. MAX Station.  I have been a full time muralist and father of two since then.  I typically work on community engagement projects that dive into cultural themes and local Portland history.

Do you incorporate parts of your identity or lived experiences into your art? If so, how and with what medium?

RRS: In the tradition of my ancestors I incorporate elements of the Wixarika Huichol style into my large scale murals.  The dots which are often confused as impressionists has its origins in Native American practices.

AC: When I started doing public art, I did it at a time when I was a full time stay at home parent of my first daughter.  Much of my inspiration came from my experiences being a father and wanting the best life in Portland for my child.  The painting I did at the 82nd Ave. Transit Station features my daughter and the activities that she does on a day to day basis.  I was honored to have the opportunity to feature her.  I imagine in the future, she will see herself as an important part of this city and as someone who really belongs here. 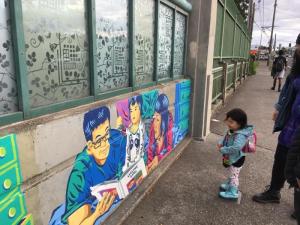 As a child of immigrant parents, I grew up as a bit of an outcast.  I was raised by my grandmother who only spoke Cantonese.  I lived in two worlds, a home that was culturally Chinese and school.  Those two worlds were very different.  Unfortunately, I feel like this led to an early rejection of my cultural background.  My goal as a father is to raise my kids in a space where they feel like they fit in to the city and community around them.

I also believe that representation is important to idea of belonging.  To be able to paint folks in the community who often go unseen or overlooked is important to me.  I realize the importance of this as a Chinese American Painter.  I am honored to paint community members of diversity cultural backgrounds in my artwork.

Explain how you choose certain images, icons, or people to include in the mural on the side of Multnomah County’s Department of Community Justice’s east campus on SE 122nd Ave. Is there a section of the mural that you especially like?

RRS: Aside from the texture and dots in the mural I incorporated the only black and white imagery meant to represent the altar and spirits related to my Medicine Mans’ family.  I also came up with the butterfly life cycle to represent change and growth.

AC: Many of the faces in the mural are of people who are affected by incarceration.  I did the community work to reach out to community members who either went to prison or worked with incarcerated people.  I have had very positive responses to this mural from the people who I painted.  For example, I painted Benjamin Morehouse drawing with his kids.  He only recently regained custody with his children.  I painted Dawud Shamsud-Din standing with his late daughter, Shantina Turner-Shamsud-Din.  I also painted Sal Aguirre to highlight his work that he does with youth through Victory Outreach.  It was an honor to hear their stories and paint aspects of their life on the wall.

The following is the official information about the mural:

Much like the cycles of nature, our lives are in various stages of transformation and growth.

To the individuals depicted in this mural, thank you for sharing your stories with us.

You are an inspiration. 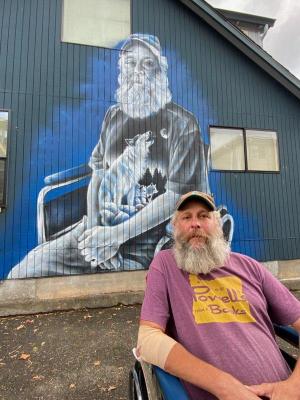 How does art impact the community around it? Can you share an example of a time when you knew your art had an effect on people?

RRS: In my experience the more of the process that is shared with the community the more it represents everyone.  In Eugene, I painted a mural with the Indigenous community that had gotten vandalized.  It became highly political and ultimately became a symbol of hope.

AC: I like to paint portraits of people who are not normally featured in public artwork.  I once painted a houseless man named Wolf in my neighborhood in Mill Park.  He used to hang out at the Plaid Pantry near my house.  He is in a wheelchair because he was paralyzed in a violent attack and had a hard time fining work ever since.  I met him because he liked the jacket I was wearing.  I had painted a portrait on the back of my jacket.  I explained to him that I was a muralist and if he let me take a picture of him, I would paint him on the wall too.  After I painted him, he told me it was one of the best things that’s ever happened to him.  I printed out a photo of the mural for him to keep.  Told told me that people treat him like a celebrity in the neighborhood.  It forced people to recognize him and I think it made a positive difference in his life.

Please share the name of a local artist who you would like to uplift and why you chose that person.

RRS: Toma Villa is a Native American artist who makes cultural traditional art but also has a vision of what the future of art can bring.

AC: I painted the mural as a collaboration with African-American artist Eatcho (Mehran Heard) and Native American artist Rodolfo Redstone Serna.  I love them both a wish the best for them and the good work they do.  My mural and spray paint mentor is Jeremy Nichols. 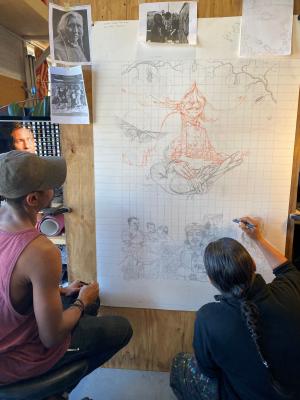 Rodolfo Redstone Serna is a multimedia artist and community advocate. He was born in Chicago, Illinois, but his roots are from Mexico. He follows the tradition of his Ancestors and shares his art with "The People."

Alex Chiu is a Chinese-American painter and muralist currently living in Portland, OR.  With a background in illustration and comics, he approaches public artwork as a form of visual storytelling.  Much of his artwork involves incorporating community input and collaboration.  The goal of his work is to accurately document local history and help communities to process cultural identity through a creative process.

Mehran "Eatcho" Heard is a freelance creative living and working in Portland Oregon. Originally from Fresno, California, he has been showing his work since 1998 throughout the west coast in a multitude of fine and contemporary art galleries and public art events. He took on my first large-scale mural in 2004; this initial project started a decade-long career of commercial, personal, and public murals, granting him the lucky opportunity to paint at home and abroad (including Japan and Panama).