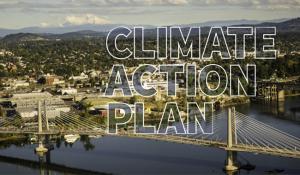 On October 28th & 29th, 2009, the Multnomah County Board of Commissioners and Portland City Council unanimously adopted the 2009 Climate Action Plan with a goal of reducing community-wide greenhouse gas emissions 80% by 2050. The 2009 Climate Action Plan serves as the 40-year roadmap for the institutional and individual change needed to reach this ambitious climate change goal. There are tremendous opportunities for communities that are leading the transition to a clean energy economy, including the creation of green jobs, clean technology innovation export, and a resilient local economy.

Impacts of climate disruption in Oregon include hotter and drier summers, reductions in snowpack leading to fewer mountain glaciers and less snowmelt runoff for streams and rivers, changes in agriculture capacity, increased wildfires, more frequent flooding and landslides, increases in health risks due to insect and disease vectors, and changing ecosystems leading to wildlife and plant extinction.

We need to work together with every citizen and every business to make the fundamental changes that will help us reach the 2050 goal. This plan identifies objectives and actions that will help residents, businesses and government work together to prevent climate change and strengthen our community's resiliency. The benefit of creating a climate resilient community is that it will only accelerate what makes our region exceptional, including compact urban areas that protect our local food supply and other efforts to create a healthy and prosperous region.

The City and County CAP is updated every three years. The most recent progress report was released in 2012. The City and County have made substantial progress in carrying out actions under the Climate Action Plan. As of  2010, emissions have fallen six percent below 1990 levels, despite rapid population and economic growth. On a per capita basis, local emissions have fallen by 26 percent since 1990. In addition, County Departments have made great strides in reducing greenhouse gas emissions from County operations. As of 2011, emissions from County operations are down 19.4 percent below 2001 levels. One goal of the current round of updates was to incorporate a greater focus on equity.