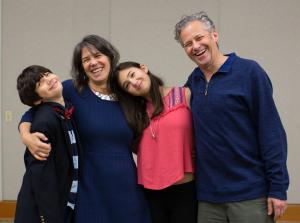 Commissioner Sharon Meieran with her husband, daughter, and son

So far, I’ve had three discussions on the topic of gun violence at my school. We talked about everything from the gun control methods provided by the government, to the walk-out itself. We had some different opinions throughout each class, while staying mostly on the same page.

Let's start with the walk-out itself, as that was the main topic of discussion for most. My school district, Portland Public Schools, actually took time out of our normal school schedule to accommodate the students’ wishes. There has been some controversy as to whether or not this was a good idea, and both sides have valid points.

On one spectrum, students believe that by taking time out of the schedule to do this “walk-out”, it defeated the entire purpose of a walk-out! Walk-outs are student organized, and the administration interfering with that took away the students voice, as in a walk-out the students leave class and will miss that portion of the lesson. This is thought to be the most important part of the whole thing, as it signifies that students believe in this, and are willing to suffer the consequences (in some districts even suspension) to stand up for what they believe. This is seen as extremely brave and powerful for young people because we are “lazy and unmotivated”. By intervening, the school staff was taking away the students power and voice, and also took away much of the symbolism. At PPS, the students decided to walk out of class in 17 minutes of silence, one minute for each victim of the shooting. The school turned that into a 40 minute assembly, with only one minute of silence for everyone. The point was also brought up that the only reason the board was doing this, is because we had a walk out last year, from which the parents of many children got upset with the director.

On the other hand, students were arguing that it was a good thing that the school made time to do this. For one thing, students didn't have to miss class, making it easier for them to decide whether or not to go (and we did have students who stayed inside, too). Teachers were also allowed to participate in this “extended version,” which many people enjoyed. My history teacher was at first jealous that the students got to walk out, because he had to stay inside because he shouldn’t be condoning students leaving the building. However, when the board introduced the extended version, he was allowed to go out with his students and stand by them while standing up for his beliefs. Another good thing that came out of this new version of the walk out was the fact that many students got to share stories, poems, speeches, etc. with the rest of the student body. All of the students speaking made everything they were saying so personal and powerful, it was hard not to at least admire it.

The thing that did bug me about the sharing is that it was cut short. I don’t know the whole story, but there was a man wearing an NRA hat who was about to go and speak, and they decided to cut him off and not let him speak despite having three minutes left in the assembly. This was probably due to the fact that they assumed he was going to say something offensive or “distract from the cause” (which, by the way, was never to protest guns, but to honor the 17 victims claimed in the shooting) I was talking to my friend, who I believe does debate with him, and he was apparently going to say something along the lines of, “I know that we may have some differing opinions about gun usage in this country, but we have the same vision of a safe America where we use our second amendment rights for what they were meant to do; hunt, and protect, not shoot and kill at random.” Now isn’t that nice? Well, he wasn’t given time to talk, because we, as a community, decided he was a threat by what he was wearing (a different issue, for a different time), and denied his right to say what he believed. Has this community become so scared of confrontation, that we have to shun everyone who might have a differing opinion, rather than see that they might have something valuable to contribute or say that’s on par with what we believe? Apparently so, and that’s disgusting.

One other thing that annoyed a lot of students, myself included, is the fact that the school board decided to do our assembly in perhaps the most secluded part of the whole school. Wilson is shaped like a big U, and we had our assembly in the direct center. Nobody saw us, or even knew it existed except for the families of students. While the purpose of this is not for publicity, the need for media attention is rather large when participating in a countrywide movement. For example, I was talking to one of my friends from Hebrew School, and they were saying how there was huge media coverage at their school, “We even had a helicopter come by,” they said. While the aim of this is not for coverage or views, I think the school could have done a bit better at making sure people noticed, and saw that students here believe in something.

The second key point of discussion with my classmates, was the current approach for gun control, particularly about proclamations to arm teachers. There was a class-wide consensus that this is a bad idea. The teachers also agreed that this is “a horrible idea… just think of the worst teacher you’ve ever had, going ‘I thought I said, open to page 394’” Pretty much the whole class, except the quiet ones, was joking around with the idea of a teacher losing their patience. Luckily, we all understood the seriousness of the issue, and quieted down to make a few more points.

One of which is the fact that as the need for more teachers arises, the new teachers might change their minds after hearing they have to carry a gun. One student said, “As a person who has considered teaching as a career choice, having to carry a gun is very alarming to me. If I knew I had to carry a gun, I would rather choose another profession.” Another concern with this is the impracticality of it. If teachers would leave the gun on a desk, that could actually be counterproductive to stopping school shootings, as a student would likely be able to grab and/or operate it. However, if teachers were to leave the gun in a safe, what good would it even be?! If there’s a shooter at your door, ready with a loaded machine gun… and the teachers 16 caliber pistol is locked in an eight digit safe, who do you think would win that fight? Besides, “you can’t fight firearms with firearms,” as another student said, playing off the original saying.

Everyone I’ve talked to agrees that a stronger background check, or upping the age a which you can buy a gun would be more effective. As of today, with the new Tobacco 21 act, you are now legally able to buy any gun three years before you are legally allowed to purchase tobacco, and I think that’s terrifying. An 18 year old, still in high school, would be legally allowed to buy a gun. If they so choose, they would be able to hide the gun in a garment, and enter the school because they go there. If they have a “reason” to, they’d be able to enter the school, with a loaded gun, and boom… School shooter. This is actually very possible, as the majority of school shooters are in fact minors, many of which attend the school at which the shooting takes place. And there’s also the fact that many young people are exposed to guns at home, and could easily access them to take to school, again, school shooter. And that’s no good, but what can be done of it?

How about raising the age to legally buy a gun to not being a minor, or not give people with a history of violence or severe mental illness access to guns based on a more thorough background check. Maybe if those can’t happen for some odd reason, at least limit the model of gun that a person can access unless they have an actual permit, legitimate use, or need for that specific type of artillery. Or even provide rules on the storage of firearms if you have a young child living with you, so that they can’t steal it. We could also put higher security at schools, so that we might be able to stop the shooter before the shooting happens.

As a student, it’s deeply upsetting and scary that my older schoolmates can legally buy a gun and possibly sneak it into the school. And I think I speak for many of my classmates when I say I want something to be done, and I want to know how and when it is to be done, because I’m tired of hearing about school shootings on the news and thinking, “wow, that could’ve been me…” If we can make it a law that the legal age to buy tobacco is 21 instead of 18, why can’t we do the same for firearms?

I’m just a freshman wanting to be able to feel safe at school, but as a community, we can help make schools safer everywhere.