As Oregon’s most populous county, Multnomah County has a rich and fascinating history that dates back to 1854. In an effort to share and preserve that 158 -year history, the county’s Archives Office will regularly feature snapshots into our past from its creation to present day. Be sure to check this page often as we unveil many more pieces of county history.

You might have heard that there’s an election just around the corner. And while this is a big one, elections are held in Multnomah County all the time. Primary elections, general elections, special elections -- all of these provide county citizens with the ability to participate in the democratic process by choosing their leaders and deciding on measures that affect their lives.

Multnomah County has conducted elections since 1859, first through the County Clerk, then through an Election Supervisor, and currently through the Elections Division. Providing information about candidates and issues, creating ballots, counting them, certifying the results, and maintaining records are central to our trust in government. 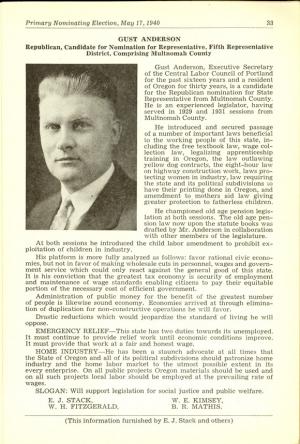 The Voter’s Pamphlet provides voters with information and supporting and oppositional discussion of candidates and issues. This page from the 1940 primary election shows Republican Gust Anderson’s statement. Though he had served two terms in the House a decade earlier, he did not win this election. 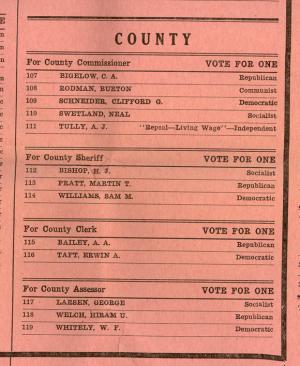 The 1932 general election was the first presidential election after the Crash of 1929 and the subsequent Great Depression. This portion of the ballot for the Nov. 8, 1932 election shows the candidates for county offices. Despite the landslide win by Democratic presidential candidate Franklin Roosevelt, the county officers were a Republican sweep – with Bigelow, Pratt, Bailey and Welch all winning. 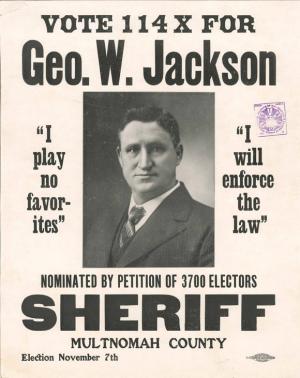 Some of the more interesting items related to elections are the various campaigning items candidates use to capture the attention of voters. Despite his request for “114 X” votes and a declaration that he wouldn’t play favorites, Jackson lost to incumbent Thomas Hurlburt. 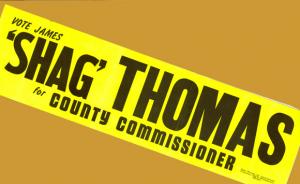 Professional wrestler James “Shag” Thomas, two-time heavyweight champion and head butt aficionado, ran for both City and County Commissioner in the late 60s and the early 1970s. Not nearly as successful as Jesse Ventura, Thomas did not win either race and retired from politics. He died of a heart attack in Portland in 1982.

So as we get ready for the upcoming election, remember that regardless of affiliation, voting is the way democratic societies make change. Get in the game and make that vote matter!

Past Into the archives entries

In 2012, Oregonians celebrate the centennial of women winning the right to vote.