“I told my parents about it when I first applied and they were like, ‘Probation officer? Are you sure you want to be a probation officer?’ I think everyone thinks it’s a tough job, but I love working with kids.”

Age: 47
I’m from: Long Island, N.Y.
Now I live in: Northeast Portland
Job: Juvenile Court Counselor for the Department of Community Justice
With the county since: 1987
You should know: I love to dance to funk, R&B and disco.

How did you end up in Portland? I was traveling the country and I had four cities I was going to look at and explore -- Portland, Seattle, Denver and San Francisco. And Portland was the one that won.

What do you do? I work with teenagers who have gotten in trouble with the law, and I have to make a decision if they need to be held in jail or whether they can go back home -- whether they’re safe and if the community is safe.

I was looking through the paper this weekend and saw a fight that happened in Gresham, three were adults and four were juveniles, and I thought to myself, “I’ll be seeing at least one of those kids.”

What is your job like day-to-day? I go to court every day to a preliminary hearing, which is like a detention hearing, where the judge has to make a determination of whether a youth is held in detention or is released. If they’re released, what conditions are put in place. The two things we base our decisions on are mainly about whether they’re going to appear at the next hearing or whether they will commit another offense.

Would you say being a Juvenile Court Counselor changed the way you raise your daughter? No, I have not been a hyper-vigilant parent. I think I have been a parent that supervises my daughter appropriately, but also realizes that I’m going to hopefully instill my child with the choices that she needs to make.

What do you do for fun? I like to go bike riding. I love spending time with the family. We love hikes, we love camping.

Where would you be if money were not a factor? I’d be in Hawaii. My wife and I both hate the weather here. My daughter doesn’t care for it, either. The thing that’s keeping me in Portland is the job. I can’t find a better job with the progressive things that we do here in the juvenile department.

What keeps you coming back to work everyday? It’s great working with kids and feeling how hopeful they are. Even though kids make mistakes, just talking to them about the whole process and what better choices they could have made and helping them understand that it wasn’t the best choice.

These kids have come from pretty bad backgrounds where there has been a lot of abuse, a lot of neglect. It really helps you realize how kids need supervision and structure. They may buck up against it, but we all need that. I’ve seen a lot of kids come back and say, “Wow, you’ve been really helpful and cared for me when nobody else did.” 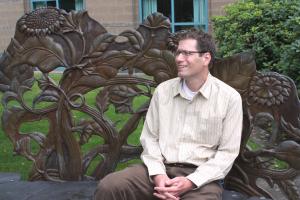 Dave believes the kids he works with are not criminals. They’re just kids who have made mistakes.