"When I first got to the CIC (Citizen Involvement Committee) , one of the things that struck me of course was the fact that there was only gender diversity on the committee. There really wasn’t any other kind of diversity. "

What is the goal of the Citizen Involvement Committee (CIC)? Remove all of the obstacles to citizen and community engagement in county government decision making. And to facilitate every opportunity for people to get engaged. That’s really it. It’s all about the process, it’s all about removing obstacles and facilitating engagement.

How did you get involved with CIC? I started six years ago. I was looking for a way to get involved in something other than city business. I felt like it was really important to be getting engaged in some activities that were involved with the most vulnerable populations. So I saw a posting for a position on the CIC and I said, “I’ll try it!”

What problems did you address on CIC? When I first got to the CIC, one of the things that struck me of course was the fact that there was only gender diversity on the committee. There really wasn’t any other kind of diversity. There might have been some political diversity, but we really didn’t talk about political positions, so I really didn’t know if we had any conservatives. It looked like we had a bunch of white liberals. It really became very clear to me that the diverse population was missing on an ongoing basis when it came to regular routine policy decisions.

You’re obviously very passionate about community involvement. What had you done before CIC? Most of my previous volunteer stuff and community engagement was really focused on Northeast Portland. I moved to Portland in ‘85 and I moved into this neighborhood in ‘88. I’ve been involved in everything. Grassroots door to door lobbying on behalf of small businesses up and down MLK and throughout North and Northeast Portland back in the late 80’s and early 90’s, when it was a much different thoroughfare, and a much different population.

What are your proudest accomplishments on CIC? I think the diversity training--being able to provide tools and opportunities for the county staff and other government agencies to reach out to the underrepresented populations. I had this idea: Why don’t we teach the outreach people and the county staff how to do better outreach? So that’s what we started.

And the friendships and relationships that I’ve established with members that I expect will continue on beyond my tenure. 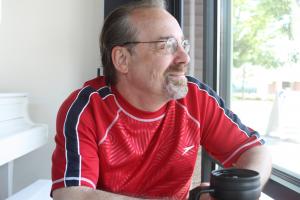