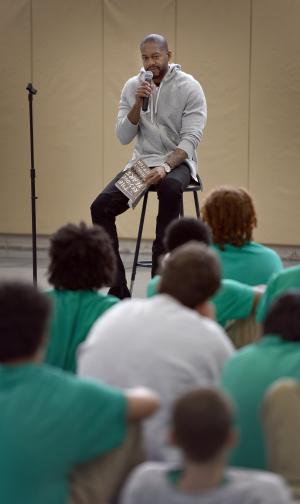 The talk began with an honest introduction inside the gym at the Donald E. Long Detention Center.

A tall man, roughly 6’4” or 6’5” with tattoos wrapped around his arms holds a microphone and with an intense look in his eyes addresses the young crowd.

“I’m from Northeast Portland and not food cart Northeast Portland. I’m from the real Northeast Portland. I was changing schools and caretakers all the time. I went to King School, SEI, Benson High School, Jefferson High School ... Normally if you have a stable childhood you would go to one school for elementary school, middle school and high school,” explained Mitchell S. Jackson.  “I said that to say that my childhood wasn’t really that stable and the reason it wasn’t was because my mother had a drug addiction when I was 10-years-old.”

The introduction comes from a former Portland drug dealer turned New York University professor and author who led a poignant discussion at Multnomah County’s Juvenile Services Division Tuesday morning as part of Multnomah County Library's “Everybody Reads” program. The hour-long discussion of Mitchell S. Jackson’s life story detailed his mother’s incarceration, his distant father and the family members left who were involved in the drug trade.

At 15-years-old, Jackson was growing tired of his mother’s absence, no money or food.

“So I decided I would start hustling.  And about the time I was graduating from high school, I was a drug dealer and when I was 21-years-old I got caught and I went to Salem for 16 months...I would be willing to bet that some of you recognize that kind of experience.”

Jackson’s storyline comes in the form of a semi-autobiographical book. Using fictional characters, “The Residue Years,” showcases a life of drugs, violence, pain and redemption. Jackson’s redemption came after he was released from prison. He was able to reclaim his scholarship to Portland State University, pursue two masters degrees and teach at New York University. His book is now being used as curriculum for students at the Multnomah County Department of Community Justice’s Juvenile Services Division who take Multnomah Education Service District classes.

Copies of Jackson’s novel were given to 100 young people at Donald E. Long  Detention Center, thanks to a donation from The Library Foundation.

“It’s a way to make a connection and engage the youth, many of whom are are facing the same struggles,” explained Multnomah County Juvenile Services Senior Manager Deena Corso.

Judging from the steady flow of questions Jackson received from the teens at the detention center, a connection was made.

How was life in prison? What tattoos do you have?  How hard was it to stop?  What motivated you to stay strong and go back to college after prison? Was it worth it being a drug dealer? What advice would you give someone who is selling drugs to get out?

“I think to mind their common sense,” responded Jackson to the latter. “We know how those stories end. We know you get some time in prison or you end up really hurt or worse. If you’re a smart, thinking man and you don’t want one of those outcomes then you have to choose something else.”

Jackson’s message of re-defining disrespect resonated with detention staff and left some members of the young audience speechless.

“I think a lot of the people I know have a really strict idea of manhood and respect…. If you talk about someone’s name or mom for example.  What do you think would happen if you stepped on Bill Gate’s foot? Do you think Bill Gates would kill you?I would think he wouldn’t see you stepping on his foot as a violation of his manhood so I think we need to re-program what is disrespect.”

Tuesday’s event was Jackson’s second discussion before a Department of Community Justice audience but the marks the first time the dynamic author was able to speak to young people inside a county detention facility.

“Go out and read brothers and sisters, do what you gotta do and don’t come back,” said Jackson.