The ceremonial groundbreaking, on the corner of Southwest First Avenue and Madison, marks the beginning of light construction on the critical and long-awaited project. Heavy construction begins in January and a new central courthouse is slated to open in 2020.

“Multnomah County has been trying to find a way to replace our courthouse for over 50 years--the first study was in 1965,” said Chair Kafoury who mc’ed Tuesday’s standing-room only event inside Jefferson Station.

“In an era of political gridlock and in-fighting, I think we can be proud that here, things are different. In Multnomah County, we can work together to make really big things happen.”

The new courthouse replaces the seismically unsafe and structurally obsolete courthouse on Southwest Fourth Avenue and Main, which was built between 1909 and 1914 -- long before modern building code standards for earthquakes were in place. The county had one-third of its current population and much less demand on the civic structure.

Audience listens to speakers at groundbreaking ceremony for new courthouse

Today, the courthouse has serious safety and operation problems, including inmates who pass in the same halls as witnesses and jurors.

“The current courthouse was built more than a century ago about the time when the Pittock Mansion was built when the biggest concern was fire,” said Chief Justice Balmer.

“In a few short years,” he continued, “when this courthouse opens it will be a safe facility that incorporates modern building standards to protect against seismic threats as well as state of the art courthouse design elements that protect victims, witnesses, jurors and the public as well as lawyers, courthouse staff and parties including criminal defendants.

The county and the state of Oregon are funding partners on the $324 million dollar project, which is a new funding model for ailing courthouses across the state. The partnership, in the busiest courthouse in the state, is not only essential, explained House Majority Leader Jennifer Williamson, it’s proven to be successful for other courthouses in the state like Union and Jefferson counties. 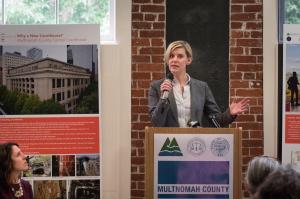 The multi-million dollar construction project is expected to bring family wage jobs with 500 craft workers on the project. The project team worked with local trade unions to develop a project labor agreement and set aggressive goals for minority and women apprenticeship and journey level workers.

“This is going to be one of the largest public works projects in this region, probably over the next several years,” stressed Senate Co-Chair of the Joint Ways and Means Committee Richard Devlin. “People should understand the more that you require women to be apprentices on these project, the more women will be available to be journey level partners on this project.”

Presiding Judge Nan Waller demonstrated the fragility of the current courthouse by bringing a hollowed-out masonry brick to the groundbreaking which she used to make the case to lawmakers over the years. 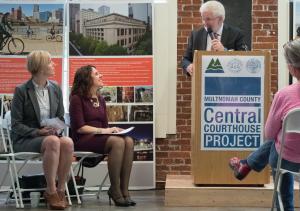 “We see this as an opportunity, not only to retire the brick but also as an opportunity to provide better access and better service for all of the litigants and members of our community,” Waller said. “Everyday we have 200 jurors in the courthouse and everyday we have classrooms full of children coming to learn about the justice system. And every day, I hope against hope, it will not be the day that the earth shakes and that we will get everyone home safely.”

The 17-story courthouse will have 44 courtrooms. It will be highly seismic resilient and adhere to 21st century best practices.  Some of its features include a larger CourtCare or court daycare so people who must come to court can drop off their children for a few hours and a legal resource center with facilitators to help navigate the legal system.  The new building will use innovative and best practices in sustainability. Corridors will be wide to easily accommodate more people moving through the building. Every court floor will have a public area with large windows and views of the Willamette River and Mount Hood to provide a calming effect for stressful experiences inside the courthouse.

The building is designed to be transparent.

Chair Deborah Kafoury introduced Commissioner Judy Shiprack as the heart of the project. Shiprack described the years of obstacles in pushing the courthouse project forward. The project gained momentum with a Multnomah County Board decision to move forward with the project in 2012.  The county would partner with the state to fund the project in 2013.

“With the benefits of all of those partners pushing on this impossible obstacle, we have arrived where we are today,” said Shiprack.

Chair Kafoury and Commissioner Shiprack presented Judge Waller with an honorary masonry brick before the event moved outside for the ceremonial groundbreaking.

Speakers and members of the project team including RicciGreene Associates, SRG Partnership (design and architecture) and Hoffman Construction (construction manager/general contractor) donned hard hats and carried gold-colored shovels to toss the first dirt for the building.

“Breaking ground is a tremendous, tremendous moment in this process and I’m honored to have worked with all of you who have worked so hard on this ‘impossible’ project,” said Shiprack.