Parading through our history

Into the archives: Parading through our history

The exhibit case pictured  to the right is located at the county’s Yeon Annex facility and contains the trophies and ribbons of parades past. From the third place prize in the 1929 Grand Floral Parade to a cup acknowledging the county’s participation in the 1959 Centennial Parade, this case holds a wealth of evidence of the county’s commitment to community.

This photograph from County Archives shows two Sheriff’s Office escorts for a 1940s Rose Festival float. The Sheriff’s Office often provided escorts to a variety of floats, and to this day officers on horseback, also known as the “Mounted Posse” participate in area parades. 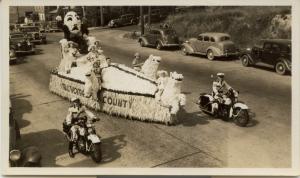 Other groups have also marched in parades on behalf of the county. The following pictures show the Road Department‘s entry in a 1958 parade and the Multnomah County Library mascot “Rosie the Reader” entertaining kids in a 1980s community parade. 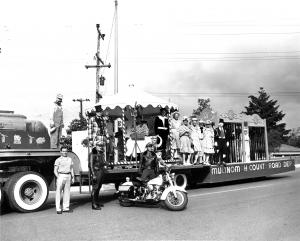 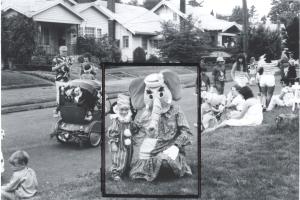 And this shot of Multnomah County employees at the 2012 Portland Pride Parade includes current county Chair Jeff Cogen (pictured second from the left in white), as well as representatives of the county employee resource group, PRISM. 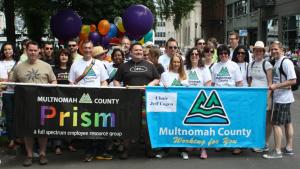 The county has paraded its commitment to fun and community for more than one hundred years. Give them a wave next time you attend. 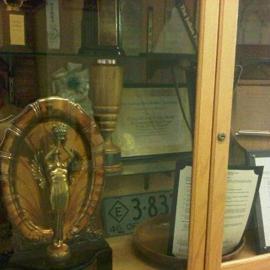 The exhibit case pictured is located at the county’s Yeon Annex facility and contains the trophies and ribbons of parades past.

As Oregon’s most populous county, Multnomah County has a rich and fascinating history that dates back to 1854.

In 2012, Oregonians celebrate the centennial of women winning the right to vote.