“I worked up until like 18 days before I gave birth. I didn’t know any different, and somebody had to pay the bills.”

Age: 33
I’m from: Hurricane, Utah (20 miles away from Zion National Park). I remember when the first stop light went in. When 7-Eleven came, it was pivotal.
Now I live in: Troutdale
Job: Soon to be mother of 3, including a set of twins
Services she uses: Women, Infant, and Children (WIC) & the Rockwood Library

What brought you here? I lived in a really small town and I just needed a change. I literally packed up an old Ford pick-up truck and drove up here. It was just me and my brother. It was like, “okay, let’s go here!” I lived in the desert, so we wanted to go see some trees.

And life happened? Did you meet your husband? It took another year. I went to work for a cabling communications company. There were like 60 male technicians, and I thought, “I do not want anything to do with any of you,” but he finally won me over after quite awhile. Finally I was like, “Alright, I’ll have lunch with you.” So 11 years later, here we are.

How did you find out Women, Infant, and Children clinic? I had joined a group called Full House Moms and Dads, and it’s for mothers of multiples. When my boys were a couple months away from being born, my husband was not working. I was working, but I knew that was going to end once I had the boys.

My husband made sure dinner was on the table and completely maintained our home and garden during that time. My step daughter was also a huge help around the house, but I was concerned about how we were going to pay our bills and keep things rolling.

I worked up until like 18 days before I gave birth. I didn’t know any different, and somebody had to pay the bills. My husband was looking for work, and thankfully a couple of months after I had the boys, he went to work for the state of Oregon.

I had posted on a general forum, “Are there any places I can go to get some help?” and one of the Full House mom’s said, “Go try WIC!”

What was your experience like? When I first came into WIC, I managed to see the same lady every time. I thought she was assigned to me. The relationship that I built with Carrie was phenomenal. It really helped me with the challenge of breastfeeding and the nutrition for myself at the time when my babies were really small.

Carrie definitely holds a special place in my heart. I think I’ve gotten her in trouble with her supervisor, because we sit and talk for so long about her kids and my kids and the different things that go along with that.

Breastfeeding twins must be a challenge . . . When I came to term, I was actually a few weeks early with my twins. I got really sick. My kidney started to shut down. I ended up having to be induced.

There were so many chemicals running through my body to keep everything functioning correctly and to keep the babies safe that those medicines that they were giving me basically shut down my milk supply. So not only did I have twins--you’re built for one, not two--but, everything was stacked up against me to breastfeed in the first place.

What’s it like having twins? I was terrified. It was a terrifying experience. You’re up every 3 hours, and you have to feed them, and my husband works the night shift--I was on my own.

How did you get through that time? I had to just do it, and I did it. It’s a huge success story.

For me, number one as a mother is I am going to breastfeed and be nutritious and conscientious of my diet. You just have to make the decision that that’s what’s going to happen and not stray away from that or give up.

I’m pretty proud of myself, I really am. One of my twins, he was just under five pounds. He was tiny. When they said that I would have to supplement him with formula, it broke my heart.

How did WIC help you during that time? WIC was so supportive of me with the breastfeeding aspect of it. The classes--just the tips that they gave me--made it happen for us. And not only that, but I lost all of my baby weight. I walked to get us out of our four walls, but it was the nutritional aspect of it and the breastfeeding. I gained probably 80 pounds with the boys, and it was gone within a year.

It gave me a lot of different ideas, because you kind of get in the same rhythm with the foods you know how to cook, what you grew up with, whatever. So that was such a clever idea.

They gave us a recipe book. They also provided a lot of materials on what each food does for the body. Just recently, they gave me a color-coded chart that tells you, blueberries do this, and red food does this, orange food does this. I thought that was pretty cool. So when I cook, I try to “cook with the rainbow,” as they call it.

How do you remain so healthy? One of my rules of thumb with my family’s diet, if I don’t know what’s in it-- if I can’t read the ingredients, we don’t eat it. I learned that from WIC. If EBT (food stamps) and WIC, if they could somehow come together and counsel people on nutrition, the health of the nation would just significantly increase. It would take a lot of effort on a lot of peoples’ parts, but it would be worth it.

Do you use any other county services? The library--the Rockwood one. We love storytime. We have so much fun!

So . . . when are you due? I’m due September 22nd. I’m so excited to meet this baby! This is going to be my last baby, so I’m enjoying every second that I can.

Have you picked out a name? Joshua Chance is what we’re thinking. 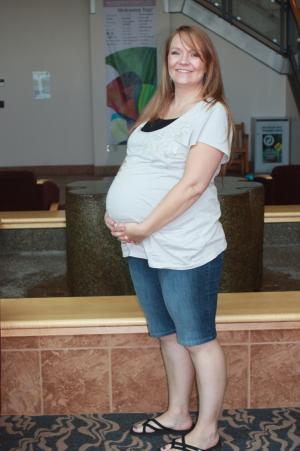 Sadee managed to lose the eighty pounds she gained during her first pregnancy by eating healthy, breastfeeding and walking.