“We all have a gift inside of us, but for some it is yet to be discovered.”

The belief that all children are capable of experiencing success given the proper support from adults and a plan for the future is the core belief of Kids at Hope, a cultural framework that challenges the “at risk youth” paradigm. 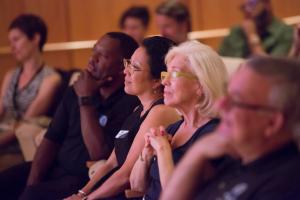 The Kids at Hope model has already been adopted by the Arizona Supreme Court and other juvenile justice jurisdictions.

In May, representatives from Multnomah County’s JSD and POIC + Rosemary Anderson High School traveled to Yuma County, Arizona to see the framework in practice. Now they are both adopting the Kids at Hope philosophy. 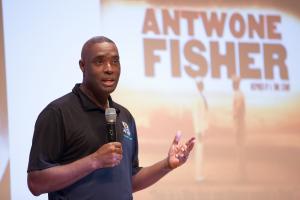 Antwone Fisher stands on stage to share his story with POIC + Rosemary Anderson High School and Multnomah County staff.
For Antwone Fisher, his ability to stay hopeful and imagine a successful future helped him persevere despite his circumstances. His mother birthed him while in prison. Two months before his birth, Fisher’s father was killed by his girlfriend during a dispute. With no one to care for him, Fisher was bounced around from one foster home to another and was subjected to abuse by adults in his life.

“I was always told that I’d never amount to anything,” Fisher recalls.

At a young age he learned that he was on his own. After graduating from high school at 17, Fisher was released from the state’s custody, receiving only $60 and a spot at a local men’s shelter. Shortly after, he joined the Navy to escape homelessness. During his service, Fisher met a psychiatrist who helped him confront his past traumas.

“This is when I started to change,” Fisher says. “He was changing the way that I thought.”

Since his service in the Navy, Fisher’s story has been written in his memoir Finding Fish, which was adapted into a movie titled Antwone Fisher. In addition, Fisher works with Kids at Hope to share his story as a testament to the power of hope. 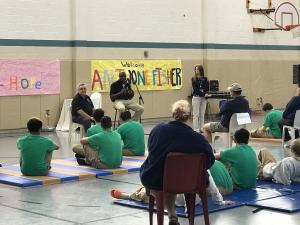 “You don’t have to live with pain in your heart. Use that as fuel to make things better. It’s better to succeed,” Fisher advised.

When asked how he maintained hope despite his circumstances, Fisher emphasized the impact that adults had on his success, pointing to his fourth grade teacher who treated him with compassion.

“You have to look for positive people,” Fisher says. “And you have to be ready for them when they are here to help.”

Tracey Freeman, Senior Manager for Probation and Treatment Services, hopes that staff at JSD can be a support to youth that use their services with guidance from Kids at Hope and organizations that have already implemented their philosophy.

They also look forward to the organization bringing hope to JSD staff too.

“We have young people for a very short period of time so we don’t always get to see the transformation,” Freeman says. “It’s renewing and hopeful, for the adults too, that we can make a difference and we do make a difference in people’s lives.”