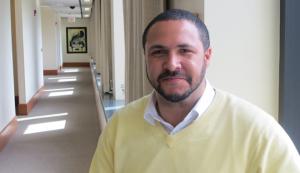 Ben Duncan starts his tenure as the county’s chief diversity and equity officer with a very clear and ambitious idea of what he hopes to achieve.

“I really want to see the values and principles of equity and empowerment embedded in all the different services, programs and policies of the county,” says Duncan, who began this week overseeing the county’s Office of Diversity and Equity. “Ultimately, I want everyone in the county to be able to own and practice those values.”

In his new role, Duncan will spearhead efforts to ensure equity and justice throughout Multnomah County government, and carry out organization-wide strategies to increase diversity and inclusion within the county.

A nine-year veteran of the Multnomah County Health Department, Duncan grew up the eldest of two children in Syracuse, New York.

As the child of two social workers-- a Jewish, Caucasian mother named Joyce from the Bronx and an African-American father named Rudy from Alabama--Duncan recalls growing up in a household that emphasized the value of helping people.

“Even though I may not have really understood it or applied it for a long time,” Duncan says, “being grateful for the opportunities you have and having empathy for those who are struggling were values passed on to me through my parents.”

After completing high school, Duncan received a lacrosse scholarship to the University of North Carolina at Chapel Hill, but dropped out following his freshman year after struggling to meet the demands of school and sports. He then moved to Vermont at the age of 19, where he did canvassing work for the Vermont Public Interest Research Group and the Sierra Club.

Although he initially took the job simply because he needed work, Duncan describes this early position as a pivotal point in his career.

“It was great exposure for the work of the environment,” Duncan says. “It shaped my whole life.”

“You'd being going door to door in these places where there was a mile between homes. But people would invite you in. I never made any money or met my quotas,” Duncan adds. “But I talked to a lot of people around their kitchen table about their experiences. Their views on environmental protections and stewardship were sometimes different than mine. And it made me really excited about the idea of figuring out how to build movements and move policies with folks who don’t necessarily share your same vision or experience.”

After a year in Vermont, Duncan spent one month on the road traveling out west. He landed in Eugene, Oregon and resumed his formal education at Lane Community College.

“The Coalition Against Environmental Racism were these people of color that were born out of labor, social justice and LGBTQ movements,” says Duncan. “They were the type of people that I wanted to do the work around.”

Duncan then secured an Americorps position within Washington State University-Vancouver’s Center for Social and Environmental Justice before finally landing at the Multnomah County Health Department in 2005.

When starting at the Health Department, Duncan worked as a community connector, building relationships with families in low-income housing. He then became a community health worker, conducting home visits to families with children with asthma.

“That was a critical point for me because it put me in spaces with families where yes, we were talking about their home environment,” Duncan says of the experience. “But we had many other conversations about the other struggles that they faced in everyday life--many of which I couldn’t solve with them, which was really frustrating.”

Duncan also held a health educator position in the county Health Department, teaching low-income housing populations how to take more control of their living environment. He then went on to serve as a policy analyst, managing the county’s Health Equity Initiative and building on his experience in the community to address housing, air quality, bed bugs and vector control issues.

In addition to his work at the county, Duncan is also an appointee to the Governor’s Environmental Justice Task Force, which he still serves on as Chairman. He is also a founding board member of Organizing People Activating Leaders (OPAL), a Portland-based advocacy group that, according to its website, organizes “low-income communities and people of color to achieve a safe and healthy environment where we live, work, play and pray.”

Having worked closely with Duncan at the Health Department, Community Health Services Director Loreen Nichols expressed her excitement for his new role.

“In his time with us at the Health Department, I have seen Ben grow into a strong champion for health equity and social justice. Ben walks his talk. From his roots as a community organizer for environmental justice, he has honed his skill at connecting policy and practice, and advancing the argument for why we need to focus clearly on racial justice when we design services or promote policy,” says Nichols. “I am confident that he will bring his considerable talent and energy to this new position. The Health Department will miss him, but Multnomah County will surely benefit.”

One of Duncan’s major orders of business as chief diversity and equity officer will be to ensure the continued application of the Equity and Empowerment Lens, a quality improvement tool developed internally in 2012 with the express purpose of increasing racial equity in all aspects of the county's dealings.

“The Equity and Empowerment Lens has the potential to really shift how Multnomah County does its work,” says Duncan. “It has the potential to shift the way we think about our interactions with each other and how we engage with communities. Its a tool that’s becoming a national model. But it’s only as good as the values and principles that are espoused in it. A hammer is only as good as you can swing it.”

When asked what fuels his passion for diversity and equity, Duncan responds:

“It boils down to a passion for people. I’m a real believer in the vision that there is right and there is wrong,” he says. “There’s justice and there’s injustice. And we as individuals, as county employees and as residents, hold incredible power to change these things.”