Congressional and Legislative Districts in Multnomah 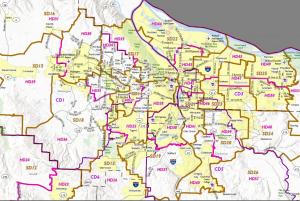 Congressional and Legislative Districts in Multnomah

Multnomah County Elections has developed new precinct boundaries, by legislative district, based on the new electoral boundaries (local and state), following state statute. Precincts are administrative in nature because Oregon is a vote by mail state. For districts that are changing, the old boundary is still in effect until the end of 2022 in terms of representation. The new boundary is for election purposes and new representation takes place in the new year January 1, 2023 when the term of office begins. (Maps courtesy of Oregon Legislature.)