YOUR INPUT IS NEEDED - Please take a few minutes to answer some questions about natural hazards (earthquakes, floods, severe weather, etc.) in our area: LINK TO SURVEY

Multnomah County is working on an update to its Natural Hazards Mitigation Plan. Your comments and answers to a few questions will help improve the plan. When a draft plan is completed in early 2022, it will also be posted here for comments.

What is the Natural Hazards Mitigation Plan and why is it being updated?

Every five years, Multnomah County is required by the Federal Emergency Management Agency (FEMA) to update its Natural Hazards Mitigation Plan (NHMP). This plan uses the best available information about natural hazards to come up with actions to protect life, property and the environment in future natural disasters. The current plan was completed in 2017, and will be updated by November 2022. 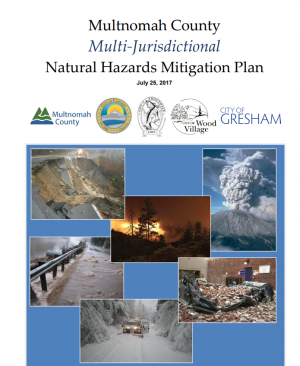 We would like to get as much input as possible, to make sure that the plan reflects the interests and needs of the diverse population we serve. This plan update includes the Cities of Fairview, Gresham, Troutdale, and Wood Village, Multnomah County, and, for the first time, the Port of Portland and Multnomah County Drainage Districts. The City of Portland has a separate NHMP, which is also in the process of being updated.

What is Hazard Mitigation?

Hazard mitigation is the work that is done before a disaster occurs, to lessen the severity of future natural disasters and make the community more resilient.

Successful hazard mitigation projects protect lives and property and also save the community money in the long run. It is estimated by FEMA that for every dollar spent on hazard mitigation, up to six dollars are saved when disasters strike.

What Hazards Are Covered in This Plan?

This plan only covers natural hazards; human-caused disasters such as terrorism and hazardous materials are covered in other plans. The State of Oregon lists natural hazards that have impacts across Oregon. Multnomah County communities plan for all of those except for coastal erosion and tsunami, which generally only damage coastal communities.

Multnomah County has the hazards listed below in its plan. Almost all of them are being impacted by climate change, and so it is more important than ever to prepare, because current information may underestimate the amount of risk we face. 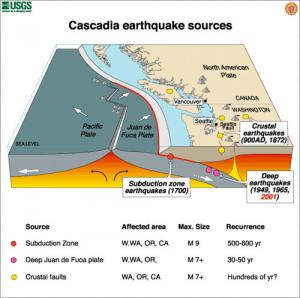 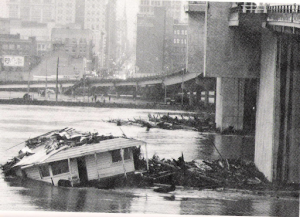 1964 Christmas Flood (Photo: Levee Ready Columbia)
FLOODS happen every year in Oregon, at least on local roads and neighborhoods. While widespread flooding is less frequent, large floods have impacted Multnomah County in 1956, 1964 and 1996, and a levee collapse destroyed the Vanport community in 1948. Typical mitigation actions for flood include:
Bonneville Dam was the site of a massive landslide about 500 years ago (Graphic: Dan Coe, Washington Department of Natural Resources)
LANDSLIDES also happen frequently, but are usually small. Larger landslides may be most likely to happen at the same time as floods or earthquakes. Steep slopes that have burned in wildfires are also at high risk, as occurred in a tragic 2020 landslide in Dodson, in eastern Multnomah County. Typical mitigation actions for landslide include:

2017 Multnomah County Winter Storm (Photo: Another Believer, Wikimedia Commons)
SEVERE WEATHER includes extreme heat, winter storms, wind storms, and drought. Unfortunately, all of these hazards are becoming more extreme and unpredictable due to climate change. The June 2021 heatwave has shown how dangerous these weather events can be, as well as the 2017 winter that also claimed multiple lives in Multnomah County. Typical mitigation actions for severe weather include:
United States Geological Survey (USGS)
VOLCANOS are very rare events, but could carry high risk. Mount Hood is a nearby active volcano that could severely impact Multnomah County and is believed to have last had a major eruption around 1731. Mount Saint Helens erupted in 1980, but ash blew east, sparing Multnomah County from the worst air quality effects. Typical mitigation actions for volcano include: 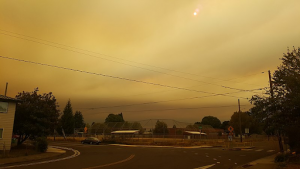 2020 Multnomah County Wildfire Smoke (Photo: Another Believer, Wikimedia Commons)
WILDFIRES are a risk every summer, especially considering the health risks from smoke, which may come from fires in other parts of the state or even outside Oregon. Summers have been becoming hotter and drier, raising concerns almost everywhere in Multnomah County. The 2017 Eagle Creek Fire burned almost 50,000 acres in Multnomah and Hood River Counties, destroyed four buildings, and closed down recreational areas in the Gorge for years. Typical mitigation actions for wildfires include:

To learn more about these hazards, go to Community Resources for Hazard Mitigation (English only). You can see maps of hazards at the following websites:

Your input on natural hazards is important to the planning process. These questions will help us prioritize strategy and identify community needs. Thank you for your time!

Contact David Lentzner, Planning Division - david.lentzner@multco.us or by phone at 503.679.3275.

Hazard mitigation resources for the community

The Plan, meeting agendas, and other documents