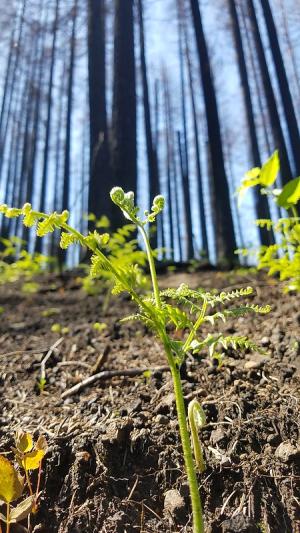 Resilience after the Eagle Creek Fire (US Forest Service)

Multnomah County is currently coordinating an update to the countywide Community Wildfire Protection Plan (CWPP). The purpose of this plan is to create a prioritized strategies to reduce the harm from future wildfires and wildfire smoke events to people, property, natural resources and infrastructure. The last plan was completed in 2010, and the update is expected to be completed in early 2022. A draft version of the plan will be posted here in Winter 2021 for public review and comment. Participating organizations come from throughout the county and include Fire Districts, City and County Departments, State and Federal Agencies, Power Utilities, and others.

Wildfire and wildfire smoke have become two of Multnomah County’s most pressing hazards. The risk of fire and smoke has been known for a long time, but responding has become more urgent in the last decade due to warmer winters and longer summers that have reduced snowpack, lengthened fire seasons and impacted natural ecosystems. At the same time, Multnomah County has had significant population growth, with more community members living alongside wildfire risk, and more people vulnerable to the health effects of smoke.

Dangerous fire conditions have led to recent disasters. The Eagle Creek Fire in 2017 burned nearly 50,000 acres in Eastern Multnomah County, destroying structures and requiring extensive evacuations. The 2020 Labor Day windstorm fanned fires across Oregon that blanketed Multnomah County in smoke and having some of the worst air quality in the world for days.

Why is the plan being updated now?

What is a Community Wildfire Protection Plan (CWPP)?

A CWPP is a mitigation plan, and mitigation is work that happens before an event occurs, as compared to responding or recovering after a disaster. Agencies come together to identify risks and prioritize strategies to try to make future events less damaging. A CWPP does not have specific about how to respond to a fire or smoke event, but instead identifies the gaps in current planning and preparation.

FEMA Disaster Cycle
The CWPP is also not a regulatory plan – it does not create new rules, but works within existing policies to create an action plan that can be successfully addressed through grants and inter-governmental coordination. 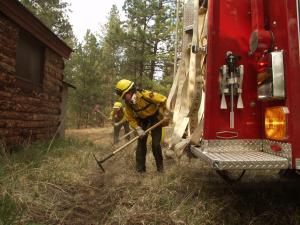 In Multnomah County, we have a mix of rural and urban environments that could potentially be at risk for wildfire.

Emergency Management’s mission is to coordinate and support the efforts of local government to mitigate, prepare for, respond to and recover from natural and human caused emergencies and disasters.

We want to hear about you! Fill out our survey, available in multiple languages.