Board of Commissioners seeks to narrow division, support diversity after Presidential election

November 10, 2016
Following this week's presidential election and political protests, the Board of Commissioners Thursday responded to concerns from residents who rely on county services including medical care and social services.

"Yesterday, our Multnomah County Crisis Line received calls from people distraught about the election, and afraid of losing benefits, resources and their jobs," Chair Deborah Kafoury read from a statement signed by all commissioners. "Others are anxious because they were born in another country and came here to escape war, political persecution or economic distress. Still others fear that there will be a resurgence of institutional racism and exclusion. As the Board of County Commissioners, we want to acknowledge these concerns and say that we are committed to our pursuit of a more equitable, inclusive and fair community.

"Multnomah County welcomes and serves residents and visitors without regard to race, origin, religion, income, gender, sexual orientation or immigration status," she read.

The statement comes as the people calling the Crisis Line after the election expressed concern about their benefits and resources. Others have told community partners they are worried the Trump administration will carry out campaign promises to deport up to 11 million undocumented residents and build a physical wall spanning the southern United States border. 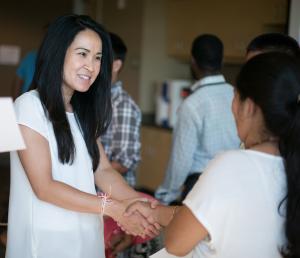 Newly arrived refugees this week asked resettlement agency staff whether they might also be deported. Others fear that family members scheduled to immigrate to Oregon early next year will now be banned because of their Muslim faith, as Trump had suggested during his campaign.

“I wanted to send that positive message, that no matter what they’re hearing or seeing, despite what you’re hearing in the news, we want you to know you belong here,” said Toc Soneoulay-Gillespie, manager of refugee resettlement for Catholic Charities. She spoke to refugees during a cultural orientation Wednesday. Soneoulay-Gillespie came to the United States as a refugee when she was a child, and she struggled to hold back tears as she spoke.

“It was really hard for me,” she said. “This is the first time I’ve ever felt like America doesn’t want me here.”

But she also began receiving text messages from people across the region. Message of support for her, her work and the refugee community. And she thought about a presentation she gave last week. Most refugees who flee their home countries remain in limbo for their entire lives, without ever settling into a new home country. Fewer than one percent of the world’s refugees will ever be resettled.

An audience member asked, given such small numbers, whether the resettlement program was worth the trouble.

“It makes a difference,” she told the woman. “I’m that one percent.”

As a program manager in a powerful organization with national name recognition, Soneoulay-Gillespie has a stronger voice than many refugees.

“Very few get this platform. We have to focus on giving voice to the refugee. I get the privilege to welcome human beings who have sacrificed so much to get here.”

Soneoulay-Gillespie invited elected officials and community members to join her in welcoming refugees as they step off flights at Portland International Airport and as they learn to navigate life in the United States.

Volunteer with one of the state’s resettlement organizations: