July 14, 2015
SummerWorks intern Ayan Ahmed hopes to be a fashion designer one day

Ayan Ahmed works her way silently down a row of towering cardboard boxes filled with the retired paper files of Multnomah County departments -- divorces, inmate , public records requests. She carries a long strip of barcode stickers, applying one over the faded label marking each box.

Lights in the secure underground facility flicker on as she moves into a new section. Trucks rumbling by overhead make an eerie intrusion.

It’s a far cry from the fashion design firm she hopes some day to own; but it’s a nice first job, she says.

“I like it. So far it’s good,” she said. “It’s better for me next time I get a job, I’ve had experience.” Ahmed, a 16-year-old junior at David Douglas High, is a SummerWorks intern with the Multnomah County Records Management. This summer she’ll help update the catalog of county archives, working with paper, microfilm and computer files.

She said this job makes her proud.

“I’m proud of myself for accomplishing things like getting a summer job,” she said. “And passing tests and school. Just becoming a better me.”

Ahmed is like so many young Americans. She plays basketball and soccer, joins friends for trips to nearby lakes or the beach when it’s nice outside. They go to movies and to the mall. She loves make-up, the clothing store Forever 21 and bright colors.

She likes picking out clothes and combining new outfits.

“I’ve wanted to be a fashion designer since I was a young girl,” she said.

Ahmed was born in Kenya after her mother escaped Somalia’s 20-year civil war. She doesn’t remember much about leaving Kenya at 8, “we flew on a lot of airplanes,’’ she said. “I don’t know how many.” 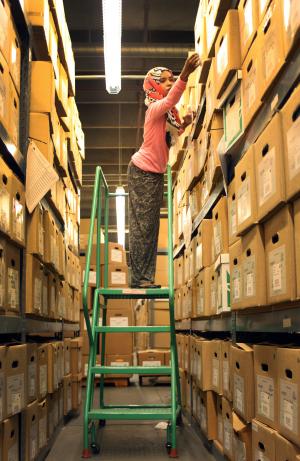 She left behind friends and beloved cousins that she stays in touch with today, by phone.

When Ahmed isn’t in school, she volunteers at the bustling southeast Portland nonprofit African Youth and Community organization to help other young East African refugees with their homework. And she’s part of a African teen homework club at her school sponsored by the Immigrant and Refugee Community Organization.

Ahmed, who is Muslim, talks about designing clothes for a living. But some people tell her to consider another profession.

“Some people will be like, you can’t do it because some companies will ask you to make short stuff, and the religion, you can’t do that,” she said. “Maybe I can have my own business so I can also make things that work for Muslim people.”

Her parents say she should do whatever makes her happy, so her 10-year-plan including finishing college and starting her own business.

She hasn’t thought much about what a business plan would look like. She laughs. She’s only 16, after all.