Hla Wah was from Burma, but she spent most of her life in a Thai refugee camp called  Nu Poe. She never thought she would have the opportunity to immigrant to the United States.

After all, the chances for any refugee to be resettled for good are about 1-in-100.

When Hla Wah lived in the camp, her dream was to leave, to find a better life somewhere else, someday, when she got older.

In the camp she went to school and helped her parents care for their large family. There were no jobs, so if the adults wanted to work, they had to leave quietly,without getting caught by the Thai police. Her parents tried to do that sometimes, but they didn’t earn enough money to make the risk worthwhile, she said.

So they had barely enough money to survive. With five brothers and four sisters, there was never enough food.

“When I lived in the refugee camp, I was really skinny. I felt like I only have skin and bones in my body,” Hla Wah said and laughed.“I really wanted to gain weight. But I knew it wasn’t not possible.”

When her family was notified that they had the chance to resettle, they debated. A brother-in-law didn’t yet have his refugee status. If they all went, they would leave him behind.

She had heard people in America had freedom, good education, and made good money. She thought if she could just there, she would go to school and not have to worry anymore.

But as soon as she arrived, her dreams suddenly seemed impossible. She was alone. She didn’t speak English. And she was broke. Five months later, she got a job with an apple company in Kennewick, Wash., heaping apples into boxes. The U.S. government had given her a loan for her flight, and she used the wages to start paying it off.

There was no time or money to pursue that dream of education.

“I should’ve come with my family,” she said while looking down on the floor. “I wouldn’t have to work as hard as I am working now, and would be able to go to school.”

She had to learn everything from the beginning, like a preschool student: how to use the bathroom, the sink, the stove, turn on the T.V, store the plates and silverwares. Everything was new and rich around her, but she was still so poor.

As a new arrival, she had to go to the Immigrant and Refugee Community Organization to study English. But the first time she tried to go, she got lost.

When she climbed on the bus, she was scared because everything was confusing and the people all had different skin tones, something she has never saw in Thailand. When she finally got off the bus, she didn’t know where she was. She used hand gestures to request the use of a stranger’s phone and she called her roommate.

While she was working in the apple company she met a Mexican man and fell in love. They quickly moved in together, and it felt better, like she had family again. When she got pregnant, they were both excited.

But two months later the man was deported; he didn’t have papers to live legally in the United States. She felt helpless, she said.

“I was sad when I found out that my son’s dad got deported back to his country and my son will never get to see his dad,” she said, her face drawn. “But I have to think of my son’s future and be a strong mom for him.”

When she got pregnant, she felt as if people looked down upon her, talked about her. 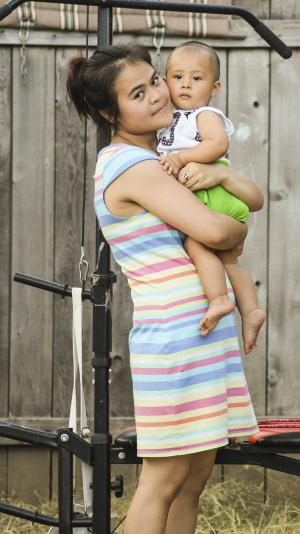 Hla Wah and her son Hayson in the backyard of their Southeast Portland home.

“They can hurt me because they have their families and know that I needed their help,” she said.

But she had begun to make a few friends in the Karen community - that’s the ethnic group of which she is a part. And they were there when, on Sept. 14 last year, she gave birth to a son, and named him Hayson.

She was heartbroken that neither her son’s dad nor her own family were with her in the delivery room, But she was thankful that her friends were with her and gave her a lot of encouragement.

Since she became pregnant, she’s received government services to soften the financial burden, including food stamps and health insurance, care at the Mid County Health Center and prenatal care through Women, Infants and Children, or WIC.

Today Hla Wah is 22. She lives in Southeast Portland with a Karen family of six, and they help her taking care of her son. The community, which is growing in Portland, is close. And so she is buoyed by those ties too.

She works as a housekeeper at luxury downtown hotel, and uses her wages to support her son and her family back in the camp.

She thinks about her family a lot - mother’s day and father’s day are especially hard. But she no longer thinks she made a mistake. At least here she has freedom to move, to speak. And more than enough food to eat.

She used to think her happiest moment was the day she found out she could resettle to America; It was like being released from prison.

But then she gave birth to a healthy son. And that feeling, she couldn’t even describe.

When she comes home from work, when she sees her son’s face, all of her unhappiness and tiredness goes away. She thinks of all the ways she’s going to be a good mother, set a good example.

“When my son grows up, I don’t want him to treat people differently just because of their status and skin colors,” she said. “I hope he will be able to get along with everyone and help single moms like me.”

Listen to Hla Wah talked about her story in Karen.