The board room of the Multnomah building hummed with the lilt of accented English as employees from across the county gathered to celebrate with people across the globe during the 16th annual World Refugee Day event.

World Refugee Day was adopted by the United Nations in 2000 to mark the anniversary of the 1951 Refugee Convention. The presentation, organized by the Immigrant and Refugee Employee Resource Group, included a panel discussion with employees and words of support from the directors of local resettlement agencies. Victoria Cross, one of the founders of the ERG, said she hoped the event would help employees build relationships.

“One of the problems that we have, that refugees and immigrant communities (have), is isolation,” she said. She began building those as staff called out their countries of birth. One by one, members of the audience chimed in: Russia. Bosnia. Romania. Mexico. Ukraine. Vietnam. Ethiopia. Laos. Vietnam. The voices went on. 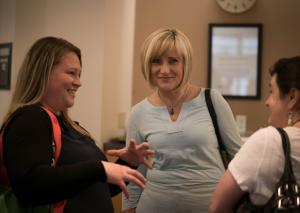 Anna Hathorne (left), who came to the U.S. from Ukraine when she was 10, talks with Health Department staffer Beata Nizinski at the county’s World Refugee Day.

“Today we focus on strength and resiliency,” said Ben Duncan, the county’s chief diversity and equity officer. So often the story of migration is one of suffering, he said. Instead, we can look to “the desire to learn and to grow and to balance the identity from where you were from, and the identity of where you are now.”

Panelist Cristabel Nicols talked about the challenges of immigrating as a child from Honduras. She came not as a refugee, but as an immigrant from one of the most violent countries on earth.

Suddenly in the United States, still only a child, she was the family’s voice; and her parents’ interpreter.

“Pretty soon I was way ahead of my parents, at a really young age,” she said. “When kids become kind of parental, in a way, because they know more than their parents… you hit the ground running, translating court documents, bills, talking to operators on the phone… and it was an experience that stretched me beyond what I think little kids should do.”

Today, as a young adult, Nicols looks back with admiration at the strength of her family and with gratitude at the risk they took to give her a better life.

“I got to put a context to all of my tension, all of my suffering, all of my oppression, and I got to fully love and accept my parents,” she said. “Because I understood that they did the best they could,” she said.

Anna Hathorne said she struggled to find herself after immigrating to the United States from Ukraine when she was 10. When Hathorne lived in the Ukraine, speaking Russian was accepted, but today when she goes back to visit, people speak Ukrainian.

“People are really prejudiced towards you if you speak Russian in Ukraine,” she said. “When I came back to the states, it was like, 'Where do I belong? I don’t belong in Russia, I don’t belong in the Ukraine, or America.' So I really had to internalize that and really look at it, and now I’m happy. I know who I am, I know where I’m from.” 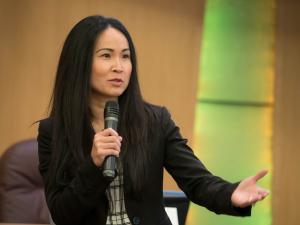 The Immigrant and Refugee ERG, together with members of the Volunteer Program ERG, presented boxes of donated household goods to Ecumenical Ministries of Oregon and Catholic Charities, two of the state’s resettlement agencies which prepare apartments for arriving families. Toc Soneoulay-Gillespie, who heads refugee resettlement for Catholic Charities, came to the United States as a refugee herself.

“I truly believe that this country is the most amazing country. It’s the only country that welcomed me and my family when my own country turned its back,” she told the audience. “So I give thanks to communities like ours, the veterans, all those who lost their lives and support this effort.”