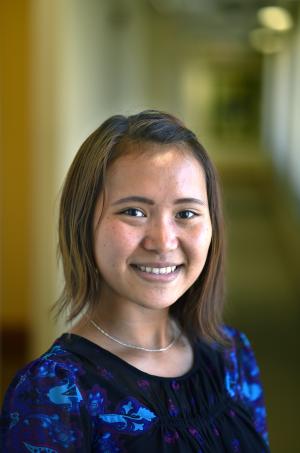 Instead, she aimed for what she could achieve.

“All the refugee kids, their dream was to become a nurse or a school teacher,” she said. “There were only two jobs in the camp. So I wanted to be a nurse.”

When her family immigrated to Oregon, Kaw Kleh Wah said everything changed. “Well, I’m scared of needles. And I don’t like to look at blood.” She thought about becoming a pharmacist, considered social work or a job in public health. Once she got her hands on a camera, she started dreaming of opening a photography studio of her own.

Kaw Kleh Wah goes by the nickname K.K. today. It saves her from correcting repeated mispronunciations or explaining that, as other people from Burma, she has just one name. No first. No last. Just Kaw Kleh Wah.

K.K. graduated in June from Madison High School with a passion for math, soccer and taking pictures. She’ll begin college this fall at Portland State University. She also volunteers as an interpreter for a Karen women’s weaving club, and organizes soccer practice for a team of Karen girls.

“I really wanted to play even though I didn’t know anything at first,” she said. “I really liked it because soccer releases you. Like when you kick it, you release your stress.”

As for photography, she’s had one eye glued to the viewer since her big sister brought home a pocket camera a few years ago.

“Now I take pictures of everything,” she said.

K.K. photographs events for the Karen community and talks openly and bluntly about the struggles that families like hers overcame. She was just two years old when her family walked away from their farm in the village of Ler Dah, passing at night through land-mine-laden forests and across the Dawna range to the Mae La camp on the Thai border.

Her parents dreamed of one day going home to their village. But it wasn’t safe to return and in the camp they had no jobs. They had no money. And their kids wouldn’t have the chance to pursue a higher education.

So a decade after arriving at the camp, her parents Par Ku Klei and Than Than Aye left their life in Thailand to offer a better one for their kids. In Portland her parents both work the late shift. Money is tight.

“I’m proud of my parents, they work so hard,” K.K. said. “Our parents, even though they have a hard time, or they’re sick, they never tell us to [stop school]. They want us to continue our education.”

She tells her story to younger Karen children, including her siblings, who often don't remember or relate to the suffering and the strength that brought their families to the U.S.

And she tells her story to U.S.-born people, some who assume she's Chinese and some who are unkind. She says they often soften when they know, "that I had a life before I came here."