Immigrant residents, particularly from Mexico, may seek help with their legal status from notary publics, believing these “notarios” are legally able to provide immigration advice.

In Mexico and many other countries, a notario publico is a person who has extensive training, similar to a lawyer in the United States. In Oregon, a notary public only has the power to witness the signing of documents and is not required to have any legal training (Lea más sobre las estafas financieras en estas fotonovelas).

Some Oregon immigrants who have used a “notario” have been deported, arrested, or unwittingly engaged in tax fraud. Others have lost thousands of dollars, only to be threatened by the perpetrator when they complained. And it’s not just immigration. “Notarios” also advertise help preparing taxes, then pocket the returns. And their victims are not only Spanish-speaking. Vietnamese, Russian and other immigrants also fall victim to this kind of fraud.

The Oregon State Bar also investigates cases of "notario' fraud, and communicates with the Oregon Department of Justice. The complaint form (only available in English) must be printed out and faxed or mailed in.

A word of caution: this can be frustrating for someone who speaks a language other than English or Spanish. For those complainants, a trusted English-speaking friend or family member might help; or use Google Translate to complete the complaint form.

Complaints are a public record, and that might cause a victim some concern.

The Oregon Department of Justice and the Oregon State Bar accept anonymous complaints. But victims are encouraged to provide contact information so investigators can build a case against a "notario." If a victim doesn’t want his or her identity known, that person could ask a friend, pastor, social service provider or lawyer to submit the form on his or her behalf. 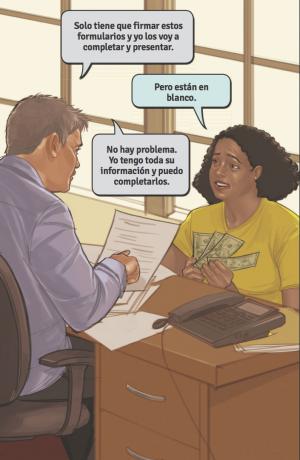 Who can I trust to help with immigration cases?

There are many qualified attorneys who are trained in the complexities of immigration law. Here are some nonprofit providers:

Where can I find help with tax preparations?

Cash Oregon: can help people with a low or moderate income.

Oregon Secretary of State: More about Oregon laws and resources.

U.S. Customs and Immigration Services: What to do if you get a suspicious letter from the feds.

Resources for immigrant victims of crime, immigrant defendants and those at risk of deportation

Nonprofits, programs and government agencies stepping up to meet a need