Eating Fish from the River

Do you fish in the Willamette River?

Eating fish is good for you! However, some fish and shellfish in the Lower Willamette River through Portland contain contaminants that make them unsafe to eat.

Contaminated fish do not look or act sick. If you fish between Kelley Point Park and the Sellwood Bridge, or in the Multnomah Channel to the Sauvie Island Bridge, there are some fish you shouldn’t eat.

See this area on a map»

These fish are safe because they spend only a short time in the Lower Willamette River.

These fish live their whole lives in the Lower Willamette and are exposed to contaminants from the river bed. Because they’re small and have shorter lives, they’re okay to eat in small amounts.

These fish live their whole lives in the Lower Willamette and are highly exposed to contaminants in the river bed.

About the size and thickness of your hand. Give children less.

Angler Wayne: How to fillet a fish (PDF)

Other Places to Fish

Before heading out, check for other fish advisories»

It's important to know that not all of Oregon's fish or waters have been sampled for contaminants.

50 places to go fishing within 60 minutes of Portland»

Watch and share this video that encourages the safer fishing of carp and other resident fish. Video is available in English, Chinese and Russian.

Which fish are safe to eat? Test your knowledge.

Contamination from decades of industrial use in the Portland Harbor has settled into the river bed. These contaminants include:

In December 2000, the Environmental Protection Agency declared Portland Harbor a Superfund site. This forces the parties responsible for the contamination to clean it up.

The health risk of most concern is people eating fish from this area.

The Superfund site is located just south of the Columbia Slough and north of the Broadway Bridge. The fish advisory area extends further, based on where contaminated fish have been found. 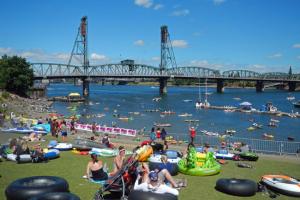 Can I swim in the river?

Yes, most of the time you can dive right in! Contaminants are in the river bed and are not in the water. The water is also tested regularly for bacteria and harmful algae blooms. Check current conditions»

Help Get the Word Out

We’re looking for people who are interested in talking with their community about fishing and eating fish from the Lower Willamette River. There will also be opportunities to participate in workshops to create informational materials.