“No one who needs shelter is shut out”: Severe weather plan for homeless stresses early preparation

With winter approaching, Portland and Multnomah County leaders stood with first responders and service providers Tuesday to renew their commitment to hundreds of neighbors facing severe weather this year without sufficient shelter: No one seeking a warm, safe refuge from deadly conditions will ever be turned away.

“Last winter, when temperatures were bone-chilling and snow and ice ground our city to a halt, hundreds of people left the warmth of their own homes to help staff warming shelters across our community,” said Multnomah County Chair Deborah Kafoury, during a media event at Bud Clark Commons’ multipurpose room.

“With that human generosity, Multnomah County and the cities of Portland and Gresham were able to offer shelter to anyone who sought it,” she continued. “This year, we are committed to do the same. During severe weather, we will stand up the shelter and resources we need to ensure that no one who needs shelter is shut out in the cold.”

Jon Sherman, a peer health navigator at Transition Projects, explained what that promise meant in his own life.

“It meant survival,’’ Sherman said. “I slept right there’’ pointing to a spot on the floor just a few feet from where he stood. Every year, Transition Projects opens a severe weather shelter in the multipurpose room, and that’s where he came inside one winter.

“I can only speak for myself as a person in recovery. Had I been stuck outside in the ice and wind blowing through, I may have looked to alcohol to get me through,’’ he said. Instead, he now works in a County-funded job helping clients access health care.

“Today, I’m part of the same team at Transition Projects that didn’t turn me away.”

Go to 211info.org to learn how to donate gear or volunteer at a warming shelter this winter.
Portland Mayor Ted Wheeler and Transition Projects executive director George Devendorf laid out a rapid-response plan shared by the Joint Office of Homeless Services and emergency management departments in Portland and Multnomah County. That plan can scale up shelter and resources quickly and remain in effect as long as conditions warrant.

As part of that plan, Wheeler, Kafoury and Devendorf issued an early call to the community for support. They’re asking neighbors interested in donating winter gear or volunteering at a warming center not to wait for life-threatening cold or snow before getting involved.

Go to 211info.org to volunteer or donate

This year, for the first time, neighbors can go to https://211info.org to proactively sign up for volunteer training or donate needed equipment. In both cases, providers say, having stockpiles of equipment and trained volunteers at the ready, before a storm or cold snap, will leave more time for saving lives when conditions change.

“Don't wait to start helping. Go to 211info.org today to learn how to donate gear or volunteer,” Wheeler said. “Experts predict a number of snow events. While I hope they’re wrong, we’re committed to being prepared.”

This year’s Point in Time Count found more people sleeping in shelter than on Multnomah County’s streets for the first time.

But for the hundreds of neighbors still sleeping without adequate shelter, even just a single day or night of severe winter weather – including high winds, and snow, sleet and ice – can be a life-threatening event that requires an emergency response. The danger grows as conditions linger.

On the busiest night during last year’s winter storms, outreach providers and first responders worked with the Joint Office and scores of volunteers and community-based organizations to help nearly 750 people escape the cold, with room to spare. Those crisis spaces were in addition to the more than 1,500 year-round and winter beds already in our community.

“There is not a time of year where experiencing homelessness is acceptable,” Devendorf said. “But we know in wintertime it’s potentially lethal.”

The plan builds on last year’s experience but it also builds on important lessons learned this summer. Extended heat waves led City and County leaders to repeatedly open cooling centers across the region. And the Eagle Creek fire tore through homes and wildlands while threatening communities on the eastern edge of the County. 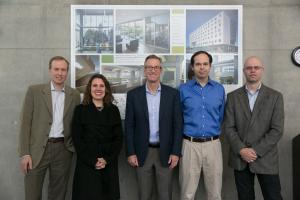 Among the refinements this year: City and County emergency management departments will play a larger role in supporting shelter and outreach operations during a major storm.

That includes identifying public buildings that can be used as a shelter now. Emergency management staffers will also ensure, in the event roads are iced over, that people in need can still get inside and that staff and volunteers will be able to report to their shifts at warming centers.

Partners also have been working for months to improve how they’ll share information about shelter capacity, transportation and outreach. The call to train volunteers early and have supplies ready and staged will add to those preparations.

“You can’t prepare too early,” Devendorf said. “We need to really serve as a team, with all hands on deck. Emergency management, as well as the City and the County, are working more closely together than ever before.”