September 13, 2018
At the joint County/City work session on supportive housing, Sept. 11, 2018.
PORTLAND — Portland and Multnomah County are taking important steps in their shared commitment to create 2,000 units of supportive housing — part of a compassionate, cost-effective strategy for addressing chronic homelessness.

Commissioners from both governments met side-by-side at Portland City Hall on Tuesday for their first joint work session since February 2017. They heard a report from the Corporation for Supportive Housing, a nationally recognized expert in affordable and supportive housing, that lays out the specific next steps and costs needed to meet the 2,000-unit goal by 2028.

They also heard about how a community-wide initiative led by the County and the City of Portland achieved record outcomes last year. This work by partners in A Home for Everyone has been carried through by the 2-year-old Joint Office of Homeless Services.

Overall, more than 35,000 people received some level of housing and wraparound services, including nearly 6,000 who were helped off the streets into permanent housing. That collaboration, and the success achieved with new investments since 2014 when A Home for Everyone was created, will serve as the foundation to add new supportive housing units.

“We stepped into uncharted territory and we bound ourselves together with one vision,” Chair Deborah Kafoury said. “Our coordinated and data-driven approach has made great strides. And we have momentum. It’s crucial that we keep it going.”

“That’s something we can all be collectively proud of,” Mayor Ted Wheeler said. “I’m confident we can continue to address this humanitarian crisis by continuing to place people into housing.”

Supportive housing — which combines deep affordability with intensive mental health and addiction services — is essential for helping people with the most difficulty finding housing not only obtain homes, but also keep them.

The announcement comes just as the number of people who face those barriers is growing. People with significant disabilities, and long periods of homelessness, are the fastest growing population on our streets.

Since the City and County set their 2,000 unit goal October 2017, more than 500 new units have become operational or are under development, according to the report from CSH.

Overall, the necessary investment is estimated at $592 million to $640 million over 10 years. Operating costs after those 10 years are estimated at $43 million to $47 million a year. The report includes a plan to align those costs across all levels of government and alongside the private development, philanthropic and health care sectors.

At the joint County/City work session on supportive housing, Sept. 11, 2018.
Supportive housing has been proven to end the painful and expensive cycle that sends some neighbors from hospital beds to jail beds to shelter beds to sidewalks and back again.

“Supportive housing is a significant investment in our future,” Portland Commissioner Nick Fish said. “Failure to invest in solutions to chronic homelessness will cost us even more.”

The new report from CSH makes clear that significant progress toward the 2,000-unit goal is already under way. Since last fall, 517 new units have already opened or are in development.

Those units mark important early proof that the strategies presented in CSH’s report can work to produce hundreds more housing units across the community. Fifty of those units will come from a recently announced first-of-its-kind single-room-occupancy-style project that combines County, City and state funding. 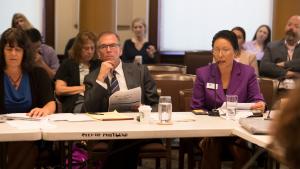 At the joint County/City work session on supportive housing, Sept. 11, 2018.
The County’s contribution comes from the sale of the isolated, expensive-to-operate, never-opened Wapato jail. After the property was sold in April, Commissioner Lori Stegmann led a workgroup to invest that money after working with Chair Kafoury to dedicate the proceeds to supportive housing, a solution that actually ends someone’s homelessness.

“I can’t think of a better project that reflects the Workgroup’s priorities and that leverages our scarce resources,” Commissioner Stegmann said. 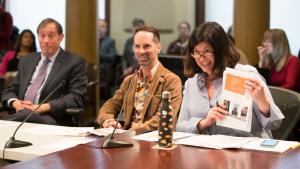 At the joint County/City work session on supportive housing, Sept. 11, 2018.
Units identified through Portland’s 2016 affordable housing bond measure also will contribute to the 2,000-unit goal. Affordable units created through a separate, regional bond campaign for housing this fall, led by Metro, also could contribute. In addition, the plan will work with state and regional efforts around supportive housing.

“Supportive housing has worked for so many. And it can work for so many more,” said Heather Lyons, CSH’s director for the Northwest and a lead author of the report. “This can’t be done without the work that’s gone into creating the infrastructure of A Home for Everyone, and it shows the community can come together to accomplish these goals.”

Political will to invest in supportive housing comes as partners in our community-wide strategy to end homelessness, A Home for Everyone, continue their record-breaking gains in helping to either prevent homelessness in the first place, lift neighbors back into housing if they lose it or offer a safer night of sleep in shelter.

At the joint County/City work session on supportive housing, Sept. 11, 2018.
According to new data also presented during Tuesday’s joint City/County work session, nearly 6,000 people were helped from homelessness back into housing in the fiscal year that ended June 30.

That’s a 21 percent increase from the number helped the year before, and a 99 percent increase, or essentially double, from what providers accomplished before A Home for Everyone launched in 2013-14.

In addition, more than 6,300 people received rent assistance for the first time so they could stay in housing, another record. That’s thousands more than the year before A Home for Everyone launched.

And more than 8,000 people spent at least one night in shelter, double the number served four years ago.

But the data makes clear that challenges loom. The length of the average stay in shelter increased last year, reflecting the difficulty people have in finding housing.

“We need to continue to build what we’ve started to build,” said Patricia Rojas, deputy director of the Joint Office of Homeless Services. “Without supportive housing, we’re not going to be able to address the issues and be as effective or optimal in each of the service areas we provide.”

At the joint County/City work session on supportive housing, Sept. 11, 2018.
The outcomes so far demonstrate the power of working closely across jurisdictions and around a common strategy. That same commitment to coordination will be vital to meeting the goal of adding 2,000 units of supportive housing by 2028.

“Supportive housing is a strategic investment in infrastructure,” Mayor Wheeler said. “And we’re building it together.”

Multnomah County has sold the Wapato Jail to Kehoe Northwest Properties, LLC. The sale has been finalized and $5 million transferred to the County earmarked for permanent supportive housing

Supportive housing is sometimes the only effective strategy for people struggling with significant disabilities and long-term homelessness.