The Multnomah County Health Department’s annual review of homeless deaths finds that 80 people who were experiencing homelessness died on local streets in 2016. Multnomah County released its sixth annual Domicile Unknown report today. Since the analysis began in 2011, health officials have found at least 359 people have died while experiencing homelessness.

The Oregon State Medical Examiner and the Multnomah County Medical Examiners are responsible for investigating all sudden, unexpected, violent, suspicious or unattended deaths.  In 2011, the Health Department began working to capture those cases in which people were likely homeless. 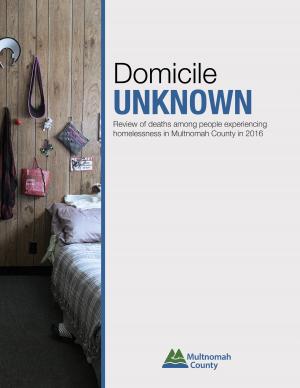 “We are again seeing people die decades ahead of their time, of preventable deaths, all around us,’’ said Israel Bayer, the outgoing executive director of Street Roots who worked with the county to develop the report.  “This is not normal and it is not acceptable,’’

“Domicile Unknown’’ was developed to help the public, elected officials and social service providers identify how resources and policies can be directed to save lives. It has been sponsored every year by Multnomah County Chair Deborah Kafoury, in cooperation with Street Roots.

Chair Kafoury said 2016 was a turning point for the community.  Multnomah County and the city of Portland created a Joint Office of Homeless Services and both governments made hard choices to find tens of millions of dollars in new funding for housing and services.

“We began to double the number of shelter beds and opened shelters for women experiencing domestic violence, for couples and for families. We opened new seasonal and severe weather shelters. And, we increased the number of people who moved back into permanent housing and helped record numbers of people from ever becoming homeless in the first place,’’ Chair Kafoury said.   The latest Point in Time Count shows the progress, she said.

“But it is clear we need to do more. We need stable funding for affordable housing. We need Legislative support. And we need our entire community: businesses, faith communities, and nonprofits to work with us. We do not have to be a place where people die on our streets.’’