The Point in Time Count: More than Just Numbers 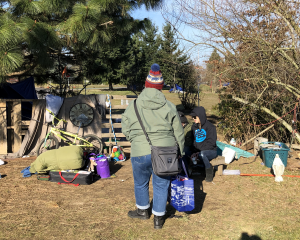 When I handed him the cup of coffee, I noticed that D.’s hand was shaking. His whole body was shaking, in fact. He was shivering, trying to build back heat after a night spent outside in the cold. I sat near him, on the small brick wall by the sidewalk, as the wind blew past us, and the cars sped by. We went through the questions one by one.

“Where did you sleep last night?”

“Right here,” he responded, motioning behind him.

“No,” he said. “Tents are too much trouble – gotta take ’em up and down. Get noticed less without one.”

We were talking on Thursday, Jan. 27, in East Portland, near an entrance to Interstate 205, where I was working as a volunteer supporting Multnomah County's 2022 Point in Time Count, which took place from Jan. 26 - 31. The Point-in-Time Count is a nationwide, one-night snapshot of homelessness. The purpose of the Street Count is to learn more about the individuals and families experiencing unsheltered homelessness - demographics, disability status, veteran status and location, among other data.

Over 150 volunteers joined with outreach staff from a number of local organizations to fan out across Multnomah County and conduct this year’s Count. This year’s survey included traditional questions asking people where they slept and what challenges they faced, but it also included questions on how COVID-19 has directly affected their lives.

This was the first Point-in-Time Count in Multnomah County in three years, after the 2021 count was canceled due to the pandemic. The last count, in 2019, found over 4,000 people living unsheltered, in emergency shelters or in transitional housing. We don’t know what the count will show this year — the survey forms are being gathered and compiled now so they can be analyzed and included in a report released by the Joint Office this summer.

But regardless of what the one-night snapshot shows, we know that it will be an undercount. As thorough as outreach workers and volunteers with lived experience can be, when it comes to searching for people sleeping discreetly in vehicles, in unsafe abandoned buildings or in forested areas, some people will remain hidden. Others choose not to participate in the survey at all. And the Department of Housing and Urban Development doesn’t count anyone who might be sleeping in illegal housing situations or who might be staying with someone temporarily.

So no matter what the final count shows, we know that the actual number of unhoused community members is higher.

D. was just one of the many people I spoke to that day. All of them had struggles, trauma. And many reported having disabilities. That seemed to match the numbers from the 2019 Count, where 62% of respondents without shelter said they had a disability.

D. shared with me the experience he had a few weeks ago, sleeping in the freezing cold weather. Even with a half-dozen extra shelters open, with room for hundreds of people, and with dozens more outreach workers and volunteers relying on a Joint Office supply center to deliver gear, he wasn’t able to connect with those services. He almost froze to death.

Luckily someone noticed him out there, alone, with no tent, in the snow. They called an ambulance. The medics who took him to the hospital said he was close to death, and they put him in the ICU and treated him for hypothermia.

He told me about his family — he had adult kids, he said, and grandkids. But he couldn’t go to them for help, he said — not in the state he was in. He said he wanted to get himself together before he saw them again. But tears were streaming down his face as he spoke. It was clear that he missed his family, that he felt lonely.

After we completed the survey, I poured him another cup of coffee and headed off. As I walked away, D. called out to me,

“You know, you stopping by here, talking to me…. It really made my day.”

That made me feel so sad, as I walked away, … thinking the few minutes I had spent with him, doing a survey, asking him questions….that made his day?

My brief experience with the world of outreach work gave me a deep appreciation for the people who do this work every day, from the many teams funded by the Joint Office to the many volunteers who also contribute night after night.

People like D. are never just numbers. They are neighbors and community members with stories and struggles, with losses and pain. And dealing with trauma while out on the street just makes that trauma worse. I hope everyone privileged enough to be housed can have the same experience, that they can spend some time just talking to our unhoused neighbors. You may be surprised at who you may meet.