It was 2015. Housing prices had pushed thousands of neighbors into homelessness, and the community was desperate for a response.

Kafoury had joined with leaders in the City of Portland to declare a state of emergency — and together invest as much as they could, as fast as they could, in creating shelter and housing opportunities for people in need.

Stacy Borke, left, and Chair Deborah Kafoury inside the Laurelwood Center on Friday, Aug. 9, 2019.
Back then, she said, the goal was to get people indoors, putting mats on the floor in “any vacant building that was safe.” Old storefronts. A little-used armory. A former restaurant. Places without kitchens and limited space for bathrooms.

“I remember trying to bring food to a shelter,” she said, “and using propane tanks” to warm the meals up.

But in the months and years since, the County and the city of Portland, through their Joint Office of Homeless Services, began shifting those new shelter beds into 24-hour, purpose-designed spaces, with bunks and classrooms and places for pets, possessions and partners.

And SE Foster Road's 120-bed Laurelwood Center, first outlined to the community in 2017, will mark the latest chapter in that ongoing evolution when it opens Thursday, Aug. 15.

With a built-in health clinic and commercial kitchen — and a focus on one-on-one engagement — the Laurelwood Center won’t just offer its guests a shelter bed. It will offer them a path back to homes of their own, so they can end their homelessness once and for all.

“We’ve learned what works and what doesn’t,” Kafoury said Friday, Aug. 9, while touring the space with Stacy Borke, senior director of programs for the shelter’s operator, Transition Projects.

The built-in health clinic at the Laurelwood Center.
Among those lessons?

“It’s a dignified space,” Borke said. “The community should be proud to create a space that reflects the inherent worth of the people we’re serving.”

Working with the community

Neighbors and other community leaders gathered at the shelter for an open house Monday, Aug. 12 — all marveling at combined handiwork of the County’s Facilities Department and program staff from the Joint Office and Transition Projects.

That gathering marked another evolution for Laurelwood.

Some neighbors were originally concerned about the new shelter. After hearing those voices County Commissioner Jessica Vega Pederson and her staff convened a steering committee of the neighbors — including opponents of the project — to work through questions and find common ground. Together, they incorporated community feedback and crafted a Good Neighbor Agreement. 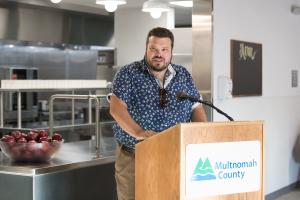 Matthew Mičetić speaks at the Laurelwood Center open house Monday, Aug. 12, 2019.
“It wasn’t always a completely smooth process,” Vega Pederson, whose district includes the shelter, said during Monday’s open house. “But I’m proud to say that we maintained mutual respect and trust throughout our time together.”

“The work we did together will serve as an example of the best way to get this work done,” she continued. “By coming together, sitting down, and building community out of our differences.

One of those steering committee members, Matthew Mičetić, also spoke to his neighbors during Monday’s open house. Ending homelessness, he said, will take more than government and nonprofits. “It’s going to take all of us. We all have the same goal.”

“I can’t encourage my fellow community members enough: Keep engaged,” said Mičetić, a past president of the Foster Area Business Association and the owner of nearby Red Castle Games. “So we can become a case study for the rest of the city.”

The shelter opens just two weeks after the release of 2019 Point in Time Count data that makes clear why investments in services-focused, housing-guided shelters are vital for the community. The count of people on a single night who are experiencing homelessness in our community found more women without shelter, more people without shelter, and more people facing homelessness while experiencing a disability. 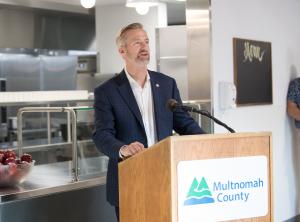 Mayor Ted Wheeler speaks at the Laurelwood Center open house Monday, Aug. 12, 2019.
If County and Portland leaders had waited for the latest Count before acting, the safety and services promised by the Laurelwood would still be years away. Instead, that help is just days away. Outreach teams have been working in the area around the shelter, finding people in the neighborhood already who want to come inside.

“Some of you may have seen the recent Point in Time report, and I believe it validates the services commitments we’ve already been making,” Portland Mayor Ted Wheeler said during the open house.

“The targeted, effective solutions we need for this crisis on our streets — from our Street Response pilot to new outreach teams to supportive housing to this very shelter — are with us right now.”

The new shelter is operated by Transition Projects with Joint Office funding. Laurelwood’s opening is among a series of changes in the shelter system.

The 100-bed River District Navigation Center in the Pearl District — also operated by Transition Projects, with Joint Office funding — will open later this month with a similar services-focused model. That 24-hour shelter will replace an 80-bed, night-only shelter downtown.

The couples dorm at the Laurelwood Center.
A new family shelter on Southeast Powell Boulevard, Lilac Meadows, has begun taking in families as it builds to full capacity. That shelter, operated by Human Solutions, will offer personal rooms and bathrooms to as many as 40 families at a time.

It will be joined this year by a fully expanded shelter in Lents operated by Portland Homeless Family Solutions. The family shelter, constructed around a trauma-informed design and with renovations funded in part by community donations, will offer personal spaces for 26 families.

And the Wy’east Shelter at 1415 SE 122nd Ave., which was envisioned as a bridge until the Laurelwood was ready, also will remain open. Do Good Multnomah has moved its veterans shelter into the County-owned space and has expanded capacity for single men.

Opportunities to get involved

At the Laurelwood Center on Monday, dozens of community members signed up to volunteer at the site with Transition Projects.

The professional-grade kitchen at the Laurelwood Center.
The shelter operator is seeking more people willing to come by — with their friends, family members, neighbors, co-workers, faith groups, etc. — and cook a meal in the shelter’s new industrial kitchen.

Borke said neighbors can also hold clothing drives, or help out by donating shoes, books, DVDs, board games and puzzles.

Just as important, she said, was if community members could offer jobs to the guests at Laurelwood — working with nearby services provider SE Works. Such opportunities would provide not just an income, but the community connections that will sustain a person as they transition back to housing.

“What I’ve heard tonight is the spirit of partnership,” Borke said Monday. “This takes all of us.”

To learn more about donating or volunteering, contact Emily Coleman, volunteer coordinator at Transition Projects, at emily.coleman@tprojects.org or 503-488-7745.