‘It's more than just a house. It’s a home and a safe place to heal ..’ Community rallies for grand opening of the Diane Wade House

The home, operated in partnership with Bridges to Change, is meant as a step toward addressing significant disparities in the criminal justice system that have long affected communities of color. African Americans currently represent roughly 20 percent of inmates in Multnomah County’s Jail, despite making up just 6 percent of the County’s overall population.

“Some days I just step back and continue to be in disbelief that in Portland, Oregon, alongside Bridges to Change and the community, we actually are opening up an African American-specific women’s transition home,” said Ebony Clarke, interim director for Multnomah County’s Mental Health and Addictions Services Division.

“I feel as though I’ve come full circle,” said Clarke. Clarke shared a story about her mother’s experiences with addiction decades ago that illustrated the importance of culturally specific services.

Clarke said she herself was in foster care when she was a baby, while her mom was in and out of jail, battling addiction. They were reunited when Clarke was 18 months old, after her mother found help in one of the first re-entry programs that accepted African Americans in the late 1970s.

“She couldn’t be herself, an African American woman in Portland, Oregon,” Clarke said.

“The fact that we have an African American program that recognizes the importance of mental health and wellness,” said Clarke. “We get to get to a place of hope, healing and recovery.”

The Diane Wade House, located in Gresham, is the first facility of its kind in Multnomah County. Its namesake, Diane Wade, was a more than 10-year veteran of Multnomah County’s Department of Community Justice. Wade worked with adults as a County parole and probation officer from May 1999 until her death in October 2010.

Family, colleagues and former clients all remembered Wade as a mentor and leader in the African American community.

“I never was aware as a child, but there was this vital turning point for my mother where she went from unknowingly self-destructive to who she was remembered as today,”  said Alexandra Iaone, Wade’s daughter.

“The fact that that change was self-initiated by my mother is incredible in and of itself,” Iaone said. “I’m appreciative that every person here gives me little pieces of my mom back.”

Wade mostly worked with women of color as a lead parole and probation officer with the Department of Community Justice’s African American Program as well as its Gang Unit. She also hosted an African American women’s group at Coffee Creek Correctional Facility. Wade died in 2010 after a seizure. 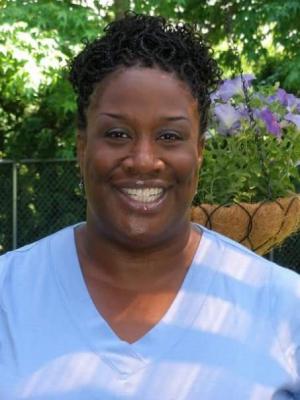 Diane Wade worked with adults as a County parole and probation officer from May 1999 until her death in October 2010.

The Diane Wade House was developed in partnership with the MacArthur Safety and Justice Challenge, local public safety partners, and invaluable advice from members of the community. 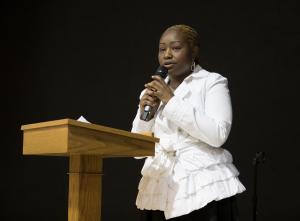 The home is part of an overall set of strategies to interrupt cycles of incarceration — particularly for communities of color.

Clients are referred by County Mental Health and Addiction case managers and supervised by County parole and probation officers as they transition to their next level of recovery. They receive assistance and guidance from women who not only have a similar cultural background, but have also experienced incarceration.

“I’ve heard some of the stories of the women who work at the home,” Quete Capuia, constituent relations coordinator for Chair Deborah Kafoury’s Office, said at the event.

“Women who struggled with addiction, incarceration, women who experienced homelessness, women who lost everything,” Capuia said. “To see those women survive and rise above and now giving back to their community by helping others who’ve experienced similar hardships, it’s impressive.”

Like Latino Network and the Native American Youth and Family Center, the Diane Wade House is designed by and for community— down to a culturally-specific curriculum for African American women. The celebration culminated with staff at the home embracing a tearful Diane Wade House resident.

“It’s more than just a house,” said Michelle Aguilar, Interim Deputy Director of the Department of Community Justice and former colleague of Diane Wade’s. “It is a home and a safe place to heal and reunite with family, children, partners and parents and our community.”