‘No one will be turned away’: As storm bears down, County, Portland leaders share plans for shelter, transportation

February 8, 2019
Chair Deborah Kafoury explains the County and Portland's severe weather plan for helping homeless neighbors Feb. 8.
Hours before a major winter storm was set to hit the region, Chair Deborah Kafoury and Mayor Ted Wheeler stood Friday with transportation, public safety, homeless services and emergency management officials for an update on how neighbors can care for one another while keeping safe on icy, snowy roads.

Chair Kafoury and Mayor Wheeler said more than 300 severe weather shelter beds will be open Friday, Feb. 8, for the fifth time since Sunday, Feb. 3 — with the commitment that no one seeking shelter during severe weather would be turned away. Hundreds of people have already come to shelter out of the cold this week.

Kafoury said those beds, when added to winter-only and year-round beds already open, mean there are 2,000 publicly funded beds available for people to sleep on the worst nights of the year. Anyone seeking shelter should call 211 to learn what shelters are open and when, she said, and to arrange a ride to shelter if needed.

“No one will be turned away,” she said, “and if necessary, we’ll open as many beds as it takes to keep people safe.”

“All of us need to look out for each other,” Wheeler said. “That’s true of all of the time, but it’s especially true during severe weather.”

Kafoury said donations of winter gear are particularly important right now to help outreach workers keep people warm this weekend, as well as next week, when cold weather is expected to linger.

Providers have a list of needed items at 211info.org, with information on how and where they can be dropped off. Items can be taken in person 24/7 to Transition Projects’ downtown donation drop site, at 665 NW Hoyt St. Outreach and housing services provider JOIN has an online Amazon list to make it easier for people to donate from their phones.

“Chances are, when people get home tonight, they will huddle up, indoors, until the snow or roads are cleared,” Kafoury said. “So it’s important, if you can, as you’re stocking up for a snowy weekend, that you please consider donating more of the gear our neighbors without shelter need. People need hats, blankets, gloves and coats.” 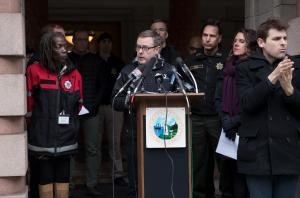 Warner urged residents to clear their sidewalks, to make travel easier for pedestrians. He also asked people not to drive in the storm and its aftermath unless absolutely necessary. If one must drive, he asked that people give city vehicles a wide berth so they can do their work clearing roads.

“It’s all hands on deck,” he said. “We are prepared to throw everything we have at this storm.

Our crews are working around the clock.”

Multnomah County Sheriff Michael Reese echoed calls for drivers to take precautions and pack travel kits. He said his deputies were ready to help drivers dealing with difficult conditions in east County on Interstates 84 and 205. 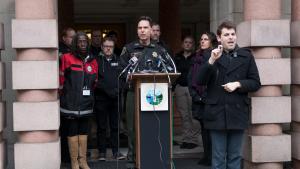 Sheriff Mike Reese at a severe weather press event Feb. 8.
“If you are stranded, or need help, call us,’’ Sheriff Reese said. “We are here to help.”

Deputy Chief Robert Day of the Portland Police Bureau and Rich Chatman, a spokesman for Portland Fire & Rescue, both said their agencies were ready to respond to emergencies, even if it took a bit longer because of road conditions, and to help people in need get to shelter.

“Our ask to the public is to help us identify people in need,” Chatman said. 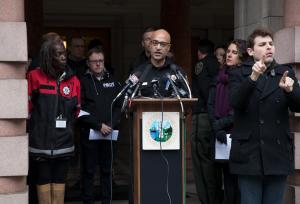 Rich Chatman of Portland Fire & Rescue at a severe weather press event Feb. 8.
Wheeler and Kafoury both urged people to check on their neighbors during the storm, making sure they have food and other necessities, especially neighbors who are seniors or who have disabilities that could make travel difficult.

“If you’re stopping at the store on the way home,” Kafoury said, “call a neighbor and ask if they need milk or bread. It takes all of us, to take care of all of us.”