‘Something that I knew would be helpful’: Volunteers provide thousands of lunches for people without shelter, with help from Joint Office

Every weekday morning, right around 10, the cars and trucks show up at the Joint Office of Homeless Services’ downtown outreach supply center. Out come the sack lunches, box after box after box, carted inside by the volunteers and food providers who made them with care.

A little while later, it’s the outreach workers’ turn to park outside the supply center. Box after box after box, they carry the lunches out as quickly as they came in. Soon, they’ll be in the hands of hundreds of people camping far from the city center.

That near-daily exchange marks another new ritual born in the wake of COVID-19.

As the pandemic upends services by closing day spaces and straining meal programs across Multnomah County, the Joint Office and its partners have stepped up in new ways to fight a surge in food insecurity among our neighbors without shelter.

Since April 29, a new program led by the Joint Office has helped outreach teams bring more than 13,000 sack lunches — each paired with a bottle of water — to people living outside far from the city center, in places where they can’t easily come downtown for food. Those deliveries also create another opportunity for outreach workers to make connections that can lead to shelter and housing opportunities. (The Joint Office is the City of Portland and Multnomah County's shared office for providing shelter, housing assistance and street outreach services.) 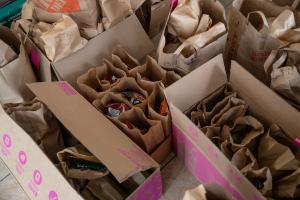 Lunches delivered to the Joint Office, before outreach workers take them to camps.

“I pick up 150 to 200 lunches, per day, and then I hand them out to the camps. And I try to go to different camps daily,” said Agnes Hall, an outreach specialist with the Urban League of Portland, one of the agencies and grassroots groups that delivers the lunches.

“People are very happy. They know Urban League’s going to be there. And they kind of depend on us,” Hall said.

Food comes from a variety of sources, including providers like Blanchet House, Catholic Charities of Oregon and Plate & Pitchfork. But every Wednesday, the lunches come from a group of students and parents from Lincoln High School.

Mary Ann Walker, a Lincoln community member, helped organize the effort after seeing a request from Blanchet House. Lincoln families answered the call, preparing thousands of meals so far. Families are asked to make up to 50 lunches each, and organizers work to collect them and drop them off. On a recent Wednesday, a group of parents and students filed into the Joint Office’s supply center with boxes of lunches.

“It was moving for me,” said Henry Babbie, a junior at Lincoln, “because as someone who is very fortunate and doesn’t have to worry about food insecurity, it was just something that I knew would be helpful to others who were in need.”

In addition to the work delivering lunches to camps outside the city center, the Joint Office has also stepped up with support for traditional meal providers. A new contract with Catholic Charities of Oregon and Blanchet House is supporting those agencies as they manage a surge in demand and produce a minimum of 10,000 meals a week for people in need. 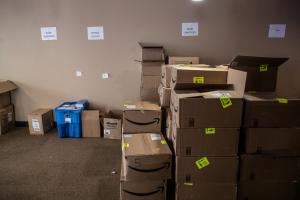 Since March, the Joint Office has distributed thousands of face coverings, bottles of hand sanitizer, gloves, blankets, tents and water bottles, among other materials. Those materials aren’t just available for outreach workers who have contracts with the Joint Office. They’re also available for grassroots groups doing outreach, too.

“People are having immense trouble getting access to food and water, at a level we’ve never seen before,” said Paul Stark, who staffs the supply center for the Joint Office and has personally delivered hundreds of lunches himself. “So the Joint Office has worked to adapt and meet that changing need.”

To learn more about how to support work to provide food for people experiencing homelessness, email johs@multco.us.