Commissioner Vega Pederson handily won re-election after serving four years on the Board of County Commissioners — a term punctuated by her focus on equity in environmental policies, transportation, and the historic and overwhelming passage of Preschool for All. During her first term, she also took on the challenges presented by pervasive and persistent community needs, including the COVID-19 pandemic and an ailing economy, wildfires, and national outcry for racial justice. 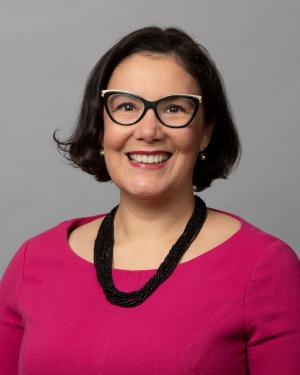 In light of those challenges, Commissioner Vega Pederson, a working mother of two and long-time east Portland resident, has continued to work with others to find solutions — including solutions rooted in community empowerment, particularly among Black, Indigenous and other communities of color.

“She is so skillful in understanding the depths of problems our community faces and particularly communities of color,” said Tony DeFalco, incoming executive director of Latino Network. “She is truly able to take that understanding and develop concrete solutions. She brings different stakeholders to the table and moves steadily towards action. And that’s even more challenging in this day and age, but she is able to continue to find pathways in getting to action.”

In the hours after President Donald Trump announced the United States would withdraw from the Paris Climate Agreement, the Multnomah County Board, led by Commissioner Vega Pederson, passed the “100% by 2050” resolution, committing the County to fully transition to 100 percent renewable electricity by 2035 and fully renewable energy by 2050.

Redlining policies that discriminated against people of color by pushing them into neighborhoods with more industrial emissions and major roadways with higher diesel pollution, as well as into parts of the County with fewer sidewalks and less frequent public transportation, led Commissioner Vega Pederson to champion an Environmental Justice Resolution in 2018. The resolution commits the County to improving environmental health for historically marginalized residents and includes meaningful engagement with affected communities.

Vega Pederson's body of work also includes social equity in infrastructure. She serves as the  co-chair of the Earthquake Ready Burnside Bridge Project. She championed work through the Getting There Together Coalition, a close partnership with regional transportation partners to center social equity, climate and pedestrian safety.

“And she did all of this while also working on Preschool for All. She has the ability to read people in the room; to understand where others are coming from and to be inclusive in the way she works with others. She is a bridge builder. She’s authentic. Plus, she’s just nice and fun.”

When a new, low-barrier shelter slated to open on Southeast Foster Road was met with concern by neighbors in late 2017, Commissioner Vega Pederson created a steering committee composed of neighborhood association representatives, social service advocates and business owners. The group forged a “Good Neighbor Agreement” that helped push past misconceptions about how shelters operate and affect neighborhoods, while establishing expectations and clear communication guidelines.

Neighbors who once raised questions eventually cheered the shelter’s opening and even volunteered, helping to prepare meals and welcome shelter guests.

Last fall, in the final year of her first term, Commissioner Vega Pederson celebrated an historic investment — eight years in the making — in the passage of Preschool for All.

Preschool for All, crafted in true partnership with Black and Brown communities will give 3- and 4-year-olds in Multnomah County access to tuition-free, high-quality, developmentally appropriate and culturally responsive preschools. It also invests in living wages for preschool teachers and assistants.

The model has garnered national headlines from publications such as the New York Times and USA Today as a potential model for a nationwide preschool expansion program.

“Passing the measure with all of the community-based policy development behind it is a true game changer for young children of color, providers and parents, particularly mothers,” said Feibel.

The coming year will focus on giving every child in Multnomah County that chance to thrive with implementation of Preschool for All; transportation funding, climate change, air quality, houselessness and behavioral health.

“And the even larger issues facing society,” said Vega Pederson at a virtual ceremony on Thursday, January 7 when she was sworn in by Circuit Court Judge Nan Waller. “Racism, income inequality, stimulus and assistance for small businesses and our struggling economy,” she said, work that must be accomplished with partners at the state and federal level.

Vega Pederson thanked her husband Aaron, and two children, her partners and staff who helped support and accomplish so many initiatives.

Vega Pederson thanked her husband Aaron, and two children, her partners and staff who helped support and accomplish so many initiatives. She also acknowledged the tremendous work lying ahead after pro-Trump supporters stormed the U.S Capitol during President-Elect Joe Biden’s electoral certification on Jan. 6.

“The riots in DC were an unprecedented armed insurrection — and totally predictable,” said Commissioner Jessica Vega Pederson. “They were the culmination of 4+ years of repugnant, racist, anti-democratic work of Trump and his enablers and mark a dark day in our history.

All of these events motivate me to keep doing more to create and shape a world where every person has an equal chance to thrive and where we don’t shy away from the big challenges that confront us around economic justice, racism, our climate crisis and strengthening our democracy.

We need to keep the lessons of 2020 at the forefront of our minds and use those lessons as our motivation this year and beyond.”

“We are benefiting from someone who is a problem solver, and deeply invested in listening and understanding the needs of the community and tireless in her work,” said DeFalco. “I’m excited to see her continue in her role on the County commission. For low-income people and people of color in the County, we need this kind of leadership more than ever.”