Washington and Multnomah counties, together with the Oregon Health Authority, are asking families and health care providers to learn about the risks and make sure children and pregnant women have their blood levels tested if they have been exposed to potentially lead-tainted products.

Working with the Food and Drug Administration (FDA) in an ongoing investigation, officials are asking community organizations, faith groups and local businesses to help identify dangerous products and educate community members about the risks of lead poisoning.

“We fully respect the deep cultural and spiritual traditions of our diverse communities,” said Ali Hamade, Ph.D., toxicologist and OHA deputy epidemiologist. “Children and pregnant women are most vulnerable to lead poisoning, so we’re asking for help from families, community leaders, shop owners and public agencies to recognize the risk and prevent harm.”

The following products have been found to contain dangerous levels of lead:

These bright red-orange powders are commonly used for Hindu religious purposes and among communities from and around South Asia. Lead is sometimes used to brighten the color or to increase the weight of the product. People can be exposed to lead when powders that contain lead enter the body through the eyes or mouth.

Health officials have discovered high lead content in samples of sindoor purchased locally under the brands: 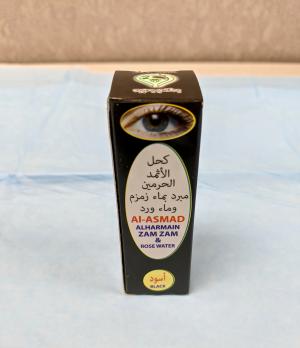 Al-Asmad Alharmain is one brand of kohl found to contain dangerous levels of lead.

Also known as kajal, surma or sormeh, this black ore is applied to the eyes for spiritual, medicinal or cosmetic purposes. It is traditionally used on babies and young children for religious purposes. The FDA has banned the import of kohl because one way of making the product is by grinding a mineral called galena—also known as lead ore—into a powder and then mixing it with other ingredients.

Multnomah County has found lead in products purchased locally and abroad, including in the brands:

This yellow-orange root and spice is used frequently in South Asian cuisine, medicine and traditional practices. It has become widely used around the world. Lead powder is sometimes added to turmeric root or powder to make the product more vibrant and to cover insect damage. People are then exposed to the lead when that spice is eaten. Health officials are primarily concerned about the spice hand-carried into the U.S. from India or Bangladesh, rather than products sold in major U.S. supermarkets.

One recent sample brought from India contained 1,240 parts per million of lead. There is no FDA regulatory limit or recommendation for lead in spice, but for reference, the FDA has set a limit of 0.1 parts per million for candy likely to be consumed frequently by children.

Families and shop owners can call the Multnomah County Health Department Leadline at 503-988-4000 or visit www.leadline.org to learn more about lead testing for children and products.

OHA and county officials are working with the FDA to test more products and consider whether alerts should be in place to stop the import of any product known to have dangerous levels of lead. Until the source and scope of the lead contamination are better understood, local health officials are also asking shop owners to protect their customers by removing products known to contain lead and testing products that may contain lead.

The risk of lead

Multnomah County's Lead Poisoning Prevention team tests kids for lead poisoning, does outreach and conducts investigations to keep families safe.
Regional and federal health authorities have long been aware of the risk of lead contamination in these products. The FDA issued a warning about sindoor in 2007 after Indiana issued a recall for a lead-contaminated sindoor product. Studies continued to find lead in sindoor products from 2014 through 2018. At the same time, pediatricians had warned as early as 2009 about the risk of lead contamination in traditional powders and spices.

Health authorities have similarly raised the alarm about lead in kohl since at least the early 1990s. The Armed Forces Institute of Pathology at Walter Reed Army Medical Center in 1995 determined that using kohl on a child or mother is associated with a significant increase in the child’s blood lead level.

From Karachi, Pakistan, to Boston Massachusetts, studies over the following decade found that high levels of lead in kohl were poisoning children. That spurred the FDA to issue a 2016 alert, banning the import of kohl into the United States.

More recently researchers have tracked lead contamination in the spice turmeric, most commonly from Bangladesh and India, and extending to communities who have immigrated to the United States.

Oregon considers a blood lead level of at least 5 micrograms of lead per deciliter of blood as the threshold for lead poisoning. Health care providers and laboratories in Oregon are required by law to report certain diseases and conditions—including lead poisoning—to local health departments.

On average, 270 Oregonians are diagnosed with lead poisoning each year, and about one-third of those are children younger than 6. The most common cases—about a third—come from ingesting paint and paint dust containing lead.

Local and state health officials have advised resettlement agencies, immigrant support groups, and medical providers for years regarding lead exposure from culturally specific sources including powders and cosmetics. About 10 percent of refugees arrive in Oregon with elevated blood lead levels, but public health officials have found some immigrant residents continue to be exposed to lead after settling in the United States.

Recent investigations of lead poisonings in Washington and Multnomah counties have spurred agencies to ramp up that work.

As part of Multnomah County’s outreach, lead poisoning prevention specialist Perry Cabot and Americorps fellow Judy Tan last month visited the Immigrant and Refugee Community Organization to review the risks of lead from sindoor and kohl. That visit prompted the team to visit local stores and purchase samples of the products for testing.

They discovered that of 19 samples of traditional powders and kohl tested last month, all tested positive for lead, and 16 contained levels above 10 parts per million — the FDA’s recommended safe limit for lead in cosmetics.

Three brands came back with levels of lead between 37,000 and 58,000 times the FDA’s recommended safe limit:

Even though the FDA sets acceptable levels for products, there is no “safe” level of lead exposure for young children or pregnant women.

“Food and cosmetics are not routinely tested for lead,” said Cabot. “We think products made in the United States, Canada, or Europe or carrying the label “lead free” will be safer.”

As Multnomah County officials identify brands containing lead, they will list those products on the Lead Poisoning Prevention site.

Along with kohl and sindoor, turmeric, a commonly used spice, has been linked to local cases of children with lead poisoning in Washington County.

Health officials in Washington County, working with the Oregon Health Authority, tested turmeric that families had brought directly from India and found very high levels of lead. One sample registered a lead level of 1,240 parts per million.

This fall they began working with a local pediatrician and member of the Indian American community who had diagnosed some of the cases of lead poisoning. Dr. Anandhi Mandi has been screening children in her practice with blood lead tests because of the risks in some products used by South Asian families.

Mandi said she has screened nearly all her Indian American patients, who comprise about a third of her Washington County practice.

“We are doing it to make sure children's lead levels are safe,” she said. “I know this is part of everyday cooking. Turmeric has anti-inflammatory benefits and there are studies showing an association with turmeric and low risks of Alzheimer’s disease. You want the health benefits, but I also worry about lead.”

Turmeric in large amounts can cause liver damage, in addition to the risk of lead contamination. That’s why Mandi recommends using the spice in small amounts, and buying brands that routinely test their products for lead.

"Whether its kumkum or turmeric, and of course rangoli powder, I'm really concerned that more products may contain lead and we just don't know," Mandi said. "I hope the government can do more testing so we'll know what other products might not be safe.”

Children living in Portland may be at risk for lead poisoning. The Leadline coordinates lead testing and prevention.

Some traditional eye powders like kohl, kajal, surmah, athmad and are made from lead, which can cause lead poisoning. In Farsi.

How some traditional Hindu powders contain lead, which can cause lead poisoning. In Nepali.