Board approves amendment to sell Wapato for $5 million 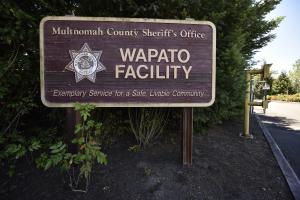 The Multnomah County Board of Commissioners voted 4-1 Thursday, April 12, to sell the Wapato Jail to Kehoe Northwest Properties LLC for $5 million.

Developer Marty Kehoe had offered $10.8 million for the unused jail and surrounding property in November 2017. But after more than three months of due diligence and engineering, he returned with an offer of $5 million on March 23.

The County counter-offered with an amendment that would require Kehoe to immediately surrender $200,000 in earnest money and close the deal before 5 p.m. on Friday, April 20.

Kehoe agreed, and after an intense discussion about using Wapato as a homeless shelter, the Board voted to approve the deal.

Commissioner Lori Stegmann said the Board had a responsibility to negotiate a viable offer in good faith. The Board had previously agreed to invest proceeds from any Wapato sale in supportive housing that helps people experiencing chronic homelessness leave the streets.

“Every one of my colleagues is deeply committed and concerned about the housing crisis, as I am,’’ she said. “But the solution is not the mass warehousing of people, the solution is not moving them far from services and social networks because an empty jail exists,’’Commissioner Stegmann said. “The solution is long-term permanent supportive housing with service that help community members break away from homelessness to build the stability they need to thrive.’’

Stegmann said that is why she introduced the resolution to use the proceeds for permanent supportive housing. “That is the direction we need to go.”

Commissioner Loretta Smith opposed the sale, saying the price was  “a horrible return” on the County’s investment of more than $109 million to build and maintain the building since it was completed in 2004.

“We are in a crisis, in an epic crisis and as the safety net government it is our duty to serve the most vulnerable,” Commissioner Smith said. “Selling at a rock bottom price at the very same time we are in dire need of housing options just doesn't cut the mustard to me.’’

But Commissioner Jessica Vega Pederson said the biggest mistake was building Wapato in the first place. A previous board, urged on by then-Sheriff Dan Noelle, proceeded with construction even when operating funds were eliminated after voters passed tax-limit Measures 47 and 50.

Commissioner Vega Pederson said the County’s repeated attempts to market the jail to private buyers have shown converting the jail to another use is cost prohibitive. “It’s plain and simple, the building is a jail, and there’s not much you can do to change that.’’

“We’ve heard this $109 million, but that is not what the property is worth,” Commissioner Vega Pederson said. “That is, unfortunately, what all of us as taxpayers have put in to where we are now with the Wapato Jail. That’s the maintenance, the building, all of that. The value of the property is in the land, not in the building. It’s actually worth more without the building on it.

“Building Wapato was a mistake. But holding onto it would also be a mistake.”

Commissioner Sharon Meieran agreed that the marketing had shown the limits of the jail’s value, but noted the counter offer had teeth, requiring Kehoe to leave money on the table and to close in a week.

“I recognize that this previous commission, encouraged by this overzealous sheriff, made a monumentally bad decision to build Wapato. It is literally a model of what not to do as a commissioner,” she said, later adding, “We want to put this property back on the tax rolls and get some value from it.’’ Chair Deborah Kafoury said she did look at using Wapato as a shelter. “It was among the first things I did. I heard loud and clear from those who know best -- those with lived experiences, expertise in housing and homelessness -- what works for people and what gets results.”

Offering rent assistance and vouchers, investments that help people quickly return to, or stay in, their homes; having domestic violence, mental health and drug treatment services integrated into the community; and providing beds and homes close to schools and jobs -- those all make a lasting difference, Chair Kafoury said.

“Wapato,’’ the Chair said, “has given me a great sense of humility about how this Board’s decisions will affect the future. But it has only deepened my resolve to learn from the past, to make the public policy decision today that dispels the myth of Wapato and to return value to the taxpayer.

“We as a board made this decision in November to sell it. It was a courageous decision, and a sound one, as we use the money for affordable housing.”

Wapato is a minimum-security detention center dedicated in July 2004. The facility has never been used as a jail. This page addresses the history and steps taken to manage this legacy issue.