The Board of Commissioners Thursday adopted an ordinance that limits the use of wood-burning stoves and fireplaces on rare days from October through February when air is stagnant and pollution builds over the county. 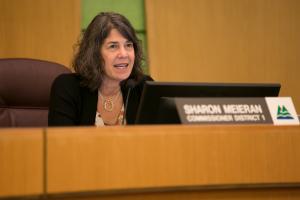 During these months, health officials will conduct forecasting with the National Weather Service and neighboring jurisdictions to identify poor air quality days. When conditions suggest an upcoming inversion as well as other weather conditions, they might issue a yellow alert recommending residents voluntarily refrain from burning, or a red alert that prohibits burning for most people.

A red alert will trigger a 24 hour-long no-burn notice to residents across Multnomah County. Health officials will notify community members through PublicAlerts, Facebook and Twitter, on the county website, local media and partnerships with local governments.

Health officials estimate conditions will meet the standards for red alerts, an average of three to five days per year. The goal is that timely curtailments will keep the region in compliance with federal air quality standards set by the federal Environmental Protection Agency.

“We don’t expect there will be a lot of days,” Environmental Health Director Jae Douglas told the board Thursday. “But when we are this close to violating national air quality standards, we really must take some action.”

Sponsored by commissioners Sharon Meieran and Jessica Vega Pederson, the ordinance also recognizes how critical wood heat is for certain people and situations. The ordinance exempts: 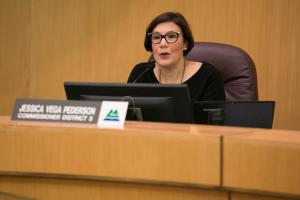 Commissioner Lori Stegmann thanked fellow board members for amending the original draft ordinance to address concerns that came from her constituents in east Multnomah County, where residents are more likely to use wood as a necessary supplement to electric heat.

“I appreciate you working so hard and making sure this is a good ordinance that people can really get behind,” she said.

Proposal would curtail wood burning on worst winter air quality days, an average of 3 to 5 days each year