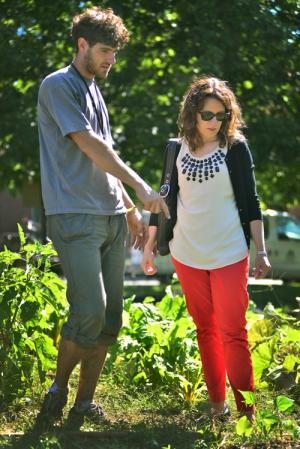 On Friday, Sept. 5 Multnomah County Chair Deborah Kafoury toured the Hands of Wonder garden at the county’s Juvenile Justice Center where many youth have worked growing fruits and vegetables while gaining life-skills.

The incentive based job-skills program launched five years ago with a handful of raised beds and young people interested in participating. It has since grown to include three flourishing gardens with a waiting list of applicants.

Chair Kafoury was shown a variety of vegetables by crew leader Sidney Walters, who dedicates weekday and weekends to the gardens. Walters proudly displayed purple cauliflower, kale, eggplant, carrots and grapes which are sold at farmers markets at the Juvenile Justice Center and the Multnomah Building by teenagers making strides to turn their lives around.

“I was so impressed with them,” said Chair Kafoury in reference to a recent farmers market she attended at the Multnomah Building. “They were so polite and knowledgeable and communicative.”

To qualify, young people under the Department of Community Justice’s supervision must first receive a referral, complete any restitution they may owe, interview and then compete for seven spots in the program.

Those who land a spot on the Hands of Wonder team learn essential job skills including timeliness, effective communication and how to work in a group setting while also learning a sustainable craft.

Participants earn 75 dollars a week for eight weeks and many leave the program with jobs.

“We had one young man who lost his dad,” said Walters. “This program really helped him through and helped him change. It really has been an amazing process for me.”

“Their level of success depends on their vision of success,” said restorative justice manager Sidney Morgan who’s overseen the program since its launch.