Studies show that some urban neighborhoods like Lents in southeast Portland can be up to 25 degrees hotter than other parts of Portland in a heat wave. A lack of trees and an abundance of asphalt freeways and parking lots capture and retain the heat.  The people who live in neighborhoods like Lents and suffer during heat waves are more often low-income residents and people of color. 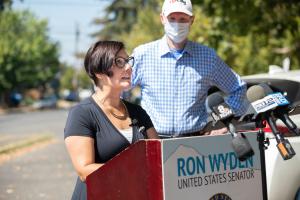 During a summer of historic heat waves, Multnomah County Commissioner Jessica Vega Pederson joined other leaders on August 16, including Oregon’s senior U.S. Senator Ron Wyden, to call for quick actions to reduce the deadly impacts of heat waves and build a clean energy economy that can combat climate change.

At a news conference at the edge of leafy Lents Park, one speaker compared the shady park to the residential areas around it.  Candace Avalos, executive director of the environmental justice group Verde, pointed out that while the park has shady trees much of the neighborhood does not.  “Many Lents neighbors are unhoused or bake in homes that don’t have air conditioning or weatherization,” she said. “Too many low-income residents in neighborhoods like Lents and Cully are forced to make choices between paying energy and food bills.” She said Portland’s recently passed Clean Energy Fund is helping low-income residents access low-cost weatherization that can protect residents from heat and lower utility bills at the same time.

Commissioner Vega Pederson has represented Lents residents as a county commissioner and previously as a state legislator, where she championed a clean fuels standard and the phase out of coal as an energy source. She noted that during the June 2021 heat wave, 62 residents died from the heat. “The climate crisis is here,” she said.

Commissioner Vega Pederson explained how Multnomah County has learned lessons from the June heat wave that were quickly implemented during the August 12-14 heat wave. “We mapped the heat islands so we could better target and locate cooling centers and our outreach to protect our most vulnerable,” she said. New cooling centers included one at Kellogg Middle School just north of Lents.

Public demand for safe refuges from the heat is growing with each heat wave, she said. “Over four days, 653 people sought overnight relief at our four cooling centers. We had more than 400 staff and volunteers step up to help.”

More needs to be done to reduce the impacts of heat waves on areas like Lents, Commissioner Vega Pederson said.  She is working to:

When it comes to a global problem like climate change, local efforts need to be supported by national ones, Commissioner Vega Pederson said. She thanked Oregon’s U.S. Senators Wyden and Merkley and President Biden for their leadership in fighting climate change. She urged Congress to pass legislation that “will build a new global economy structured around equity and renewable and sustainable energy.”

Senator Wyden called this summer’s heat waves “a life and death crisis that deserves a timely and urgent response.”  As chairman of the Senate Finance Committee, Senator Wyden is advocating for his Clean Energy for America Act to be passed this fall. He noted the combined economic and environmental benefits that come with energy efficiency and clean, renewable energy sources.

Senator Wyden’s adopted legislation has already made it possible for health plans to cover air conditioning for Medicare Advantage customers.  He supports extending that coverage to Medicaid clients this year, which would cover more low-income, vulnerable residents in areas like Lents.  “It’s the moral thing to do and it’s also economically smart,” Senator Wyden said. “For a few hundred bucks spent on air conditioning, we can avoid a costly hospital visit, and prevent tragic deaths.”

Representative Khanh Pham worked as a community organizer in Southeast Portland around 82nd Avenue before she was elected to the Oregon Legislature. “Neighbors in areas like Lents have air quality concerns also,” she said. “They are boxed in by Interstate 205, 82nd Avenue and some of Portland’s busiest roads, such as Powell Boulevard and Division Street. The asthma rate in this area is twice as high as the rest of the city.”

While Rep. Pham supports a national response to climate change, she also advocates responses by local governments and community organizations, such as:

“Communities know their needs the best,” she said, “and the most resilient communities are organizing.”  During the August heat wave, residents of Lents created their own cooling station in the park to hand out cold water to neighbors. "Let’s give communities the support they need to take care of each other,” Rep. Pham said.