This story has been updated to include remarks from the Oct. 14 forum in St. Johns.

Columbia Riverkeeper’s conservation director got right to the point. The fuel tanks, train routes and pipelines that snake alongside the Willamette River in northwest Portland pose one of the most significant hazards in the region in the event of a Cascadia Subduction Zone earthquake.

“I’m not going to bury the lede,” said Dan Serres as he faced a packed audience at the Linnton Community Center on Oct. 7. “This is a place located on soil that will liquify during an earthquake. Could you have put all this in a worse place?” 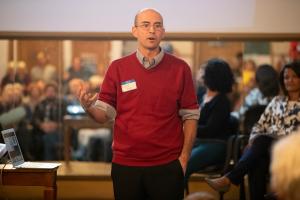 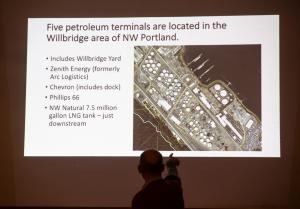 The forums focused on how prolonged ground shaking could destabilize what’s known as Oregon’s “Critical Energy Infrastructure Hub,” a six-mile-stretch of tanks and infrastructure east of Highway 30 on the river’s edge.

Dr. Meieran, an emergency room physician, said she became “frankly terrified’’ by Oregon Public Broadcasting’s 2015 documentary “Unprepared,” which describes the hub as the region’s “Achilles’ heel” during a major earthquake. Most of the tanks and pipelines were built before people understood the threat posed by the Cascadia Subduction Zone’s “megathrust’’ fault or seismic resilience. Today, about 90 percent of the liquid fuel in Oregon, and 100 percent of the jet fuel for Portland International Airport, come through the hub.

“Some of these tanks are 100 years old,” Meieran said. “And when they buckle, could easily cause a huge fire on the river itself and be a disaster for human health, the environment and our entire state’s economy.”

In the County’s 2020 budget, Meieran helped secure $50,000 for Portland State University to estimate the potential costs of a catastrophic disaster and evaluate what insurance mechanisms are in place for the fuel companies now.

There is currently a patchwork of state, federal and local regulations around that area, one that organizers say has allowed gaps.

With the region overdue, according to scientists, for a major Cascadia earthquake, Commissioner Jayapal said the County is now reviewing what it can regulate and where it has jurisdiction. And whatever lessons emerge could apply to hazards beyond earthquakes.

“The question is not if (the earthquake happens), it’s when,” Jayapal said. “We’re not talking about oil trains, but I hope that what we learn will be applicable to them as well, which is how can we assess and assign the risks associated with these potential disasters.”

Jayapal said she is particularly concerned because any disaster would disproportionately affect communities of color and people with lower incomes.

Cassie Cohen from Portland Harbor Community Coalition echoed that worry while also raising concerns about how complicated recovery could be.

The Portland Harbor Superfund, she said, was identified as a “national priority and one of the most toxic sites in the nation nearly 20 years ago, and yet has still not even begun being cleaned up.”

The forum included Elijah Cetas from the Center for Sustainable Economy and John Wasiutynski, director of Multnomah County’s Office of Sustainability.

The tanks and the rest of the energy hub all sit within the city of Portland, which is responsible for zoning and approving new development.

Jonna Papaefthimiou from the Portland Bureau of Emergency Management said her bureau is working with the city’s Bureau of Development Services on mandatory seismic retrofits of tanks and infrastructure. The city expects to have a draft of new code to share by the end of the year.  The city is also working with the County on ensuring owner-operators in the hub take on financial responsibility for those fixes. And, she said, the city is looking to improve access to “Community Right to Know” information.

In St. Johns, on Oct. 14, the director of the Portland Bureau of Emergency Management, Mike Myers, firmly restated those priorities and added additional details. He said new rules for seismic retrofits would apply to all hazardous chemicals in the energy hub, including chlorine. "I couldn't live with myself if we didn't retrofit all of those tanks," he said.

He joined Commissioner Meieran in saying owner-operators in the hub should be required by Portland and the County to carry "risk bonding" insurance policies that reflect the economic and environmental costs of not just a disaster but also the fallout from day-to-day storage and use of fossil fuels.

"We need to validate the economic impact and also the environmental impact. Then what's the cost," Myers said. "It's unprecedented. But we have to do it."

Myers also offered specifics on how "Community Right to Know" information could be improved. He said he's pushing for a new website that would let people enter their addresses and quickly see what chemical hazards pop up nearby. And he wants to lobby for state legislation, similar to a law in Washington state, that would subvert federal rules that allow rail operators to keep hazardous shipment contents secret by forcing facilities that receive those shipments to file regular reports instead.

"Oregon can do that," he said. "It's common sense legislation we can pitch forward."

Papaefthimiou, during the Linnton hearing, said the most important safety net in any disaster is neighbors. She thanked Linnton residents in particular for being organized and preparing for an emergency, which may include sheltering in place in the event of a disaster. She referred people to a new shelter in place video.

Serres of Columbia Riverkeeper thanked the Commissioners for raising the issue.

“I’m really pleased to see to see the County taking this up and asking the hard questions,” Serres said. “They’re right to be asking what do we do, with about a million barrels of oil in this area.”

Commissioner Jayapal acknowledged that residents have waited a long time for the government to pay attention. “I’m sorry it's taken us so long... but we are here,” she said. “And we’re here to figure it out.”

A second forum will be held Monday, Oct. 14, from 6:30 to  8 p.m. at the Bureau of Environmental Services’ Water Pollution Control Laboratory, 6543 N. Burlington Avenue in Portland. To request language translation services, child care or other accommodations, call 503-988-5220 or email district1@multco.us.