August marked the three-year anniversary of the opening of the Laurelwood, and Commissioner Vega Pederson celebrated the occasion by serving a meal with her team to the residents of the shelter. Commissioner Vega Pederson led the effort to build community support for the shelter when its location was announced in the Foster-Powell neighborhood in December 2017. Concerned neighbors and business owners expressed opposition to the shelter, so the Commissioner formed a steering committee of neighborhood leaders, business owners, the shelter operator, the Joint Office of Homeless Services (JOHS), and others. The committee spent eight months building support for the shelter, and concluded its work with a Good Neighbor Agreement (GNA), which stipulates communication between the neighborhood and the shelter, and delineates how complaints and concerns are addressed. After three years, the Commissioner's office has heard few complaints, and more than 300 people have transitioned out of the shelter and into stable housing. The shelter houses 120 people any given night.

That Good Neighbor Agreement informed the template that’s now the starting point for every shelter or safe rest village that the JOHS opens. Last spring, elected officials from Washington County and Beaverton visited the Laurelwood to learn about the agreement and outreach process as they look to expand their shelter system. Commissioner Vega Pederson loved being back in the Laurelwood, talking with residents and staff, and serving a summery meal.

Commissioner Vega Pederson also met with Multnomah County Sheriff Mike Reese, to discuss the dangerous new forms of fentanyl and meth circulating in our community, and what that means for our public safety officials. They also discussed gun violence and outreach efforts to those living unsheltered. Given the increase in gun violence, she also met with probation officers and leadership of our Department of Community Justice, discussing the challenges probation officers are facing, the stress they are under, and what they need to help keep their clients away from violence and crime.

Commissioner Vega Pederson also met with Michael Liu, whose family owns and operates the Fubonn Shopping Center, the largest Asian shopping center in Oregon. They discussed the challenges facing businesses in the Jade District and along 82nd Avenue. Commissioner Vega Pederson was recently selected to serve on the 82nd Ave. Transit Project Advisory Committee, which will examine how to improve transit and safety along 82nd Ave. She also met with the owner of Menlo Park Plaza, on NE 122nd and Glisan, to discuss Multnomah County’s library operations center across the street and the overall needs of the area.

Lastly, Commissioner Vega Pederson attended the premier of the film Shattered: How Women Broke the Glass Ceiling in Oregon Politics. The film features the Multnomah County board, as well as state Representative Andrea Valderrama and former Oregon governor Barbara Roberts. It also focuses on the work Multnomah County has undertaken under women leadership, including the creation of Preschool For All, the county’s universal, free preschool system that is kicking off this month, serving nearly 700 children throughout our community.

The impact of climate change was evident this August in Multnomah County as we recorded the hottest month and the County opened cooling centers to assist residents. Commissioner Stegmann joined U.S. Sens. Jeff Merkley,  Ron Wyden, Gov. Kate Brown, EPA Administrator Michael Regan, Chair Deborah Kafoury and Multnomah County Office of Sustainability Director John Wasiutynski for a roundtable discussion on clean air shelters and cooling centers. She was proud to join the delegation in East County for a tour of Mudbone Grown Farm as they discussed with owners Arthur Shaver and Shantae Johnson the difficulty of farming in a changing climate.

Commissioner Stegmann has spearheaded the effort to develop a virtual resilience hub  to increase access to emergency services and is currently laying the foundation to create a physical resilience hub in East County that will serve as a safe emergency site by providing needed resources and services to protect our community. Together with Vibrant Hawaii, she toured existing resilience HUBs and met with residents and community-based organizations to learn how the facilities operate during emergencies and how they support the community during non-emergency times.

Commissioner Stegmann was honored to attend the 8th Global Korean Politicians Forum held in Seoul, South Korea, where she gathered with a cohort of 70 Koreans from around the world who are elected officials or have leadership roles in their local communities. The Forum’s theme was “Beautiful Koreans, Dreaming for Peace '' and was hosted by the Overseas Korean Politicians Council. Also in attendance from Oregon were Cheryl Myers, Deputy Secretary of State and Dr Edward Kimmi, Beaverton City Councilor. She reflected that, “It was pretty amazing to see the tremendous impact that fellow Koreans from Germany, Australia, Canada, New Zealand, Argentina and across the U.S are having on global politics. It’s a reminder that many of the issues we face here in Multnomah County are not unique and that our society as a whole has a responsibility to one another no matter where we live.”

A long time advocate for addressing the houselessness and behavioral health crisis on our streets, Commissioner Meieran has been a stakeholder in several county, state, and national bodies to push for more effective, efficient, and urgent action.

Commissioner Meieran recently met with Deputy District Attorneys tasked with serving on the Multnomah County District Attorney’s Office Access Attorney Program (MAAP). The Commissioner was a strong advocate for funding this budget amendment during the most recent County budget cycle and is grateful that their work will begin soon. The program seeks to address two key issues: public safety and community trust. With a MAAP Attorney placed in Old Town and one in East County, the Commissioner is hopeful that by working closely with the community, there will be improved accountability, safety, and justice in Old Town and beyond.

Commissioner Meieran knows that the conditions in Old Town for residents, business owners, service providers, and cultural institutions are unacceptable. Her staff served breakfast to people experiencing homelessness at the Blanchet House and talked with volunteers and staff to learn more about what is happening on the ground. Commissioner Meieran and her team subsequently joined the recurring Old Town Problem Solvers meetings that are convened by Mayor Ted Wheeler’s Office and include many Old Town community leaders and City of Portland staff. Commissioner Meieran’s staff introduced the new Old Town MAAP Attorney to the group to help raise awareness about their work and build community connection.

The Behavioral Health Emergency Coordination Network (BHECN), a multi-jurisdictional, cross agency collaboration to address ongoing challenges in the local behavioral health crisis services system, has resumed after an organizational restructure. Commissioner Meieran is excited to keep serving as a member of the BHECN Executive Committee and continue the critical work necessary to coordinate systems between the City, County, and other entities to create long lasting and life saving changes in our community to improve wellness and livability for all.

A dedicated advocate for universal health care, Commissioner Meieran is proud to serve Multnomah County residents on the SB 770 Task Force on Universal Health Care. Established in 2019, the Task Force is charged with recommending a universal health care system that offers equitable, affordable, comprehensive, high quality, publicly funded health care to all Oregon residents. Through her involvement as the Co-Chair of the Association of Counties Health and Human Services Committee, Commissioner Meieran has been proud to work alongside other doctors, county and state leaders. The Task Force will submit their final recommendation for a Health Care for All Oregon Plan no later than the end of this month.

Commissioner Meieran received the distinct privilege to serve on the National Behavioral Health and Justice Systems Leadership Network hosted by the National Association of Counties (NACo). Officially titled the “Familiar Faces Initiative (FFI) Leadership Network”, FFI creates space for data-sharing between multiple communities across the nation and is meant to increase coordination between behavioral health and justice systems. The FFI focuses on helping individuals who are the most frequent users of our healthcare, housing and justice systems (also referred to as familiar faces). By identifying the highest-need residents in each community, the FFI will be able to: collect and share data, examine the gaps in our systems, and create a plan to utilize the most effective methods to address our behavioral health crisis. Commissioner Meieran’s experience as an emergency room physician and a civil litigation attorney will bring a unique and crucial lens to the FFI Leadership Network.

Summertime provides opportunities for community connection and for visiting County partners, and Commissioner Jayapal has spent the past few months taking advantage of those opportunities.

In July the STARS Mentoring Program invited Commissioner Jayapal to share a few words in honor of Dean’s Beauty Salon and Barbershop’s recognition in the National Register of Historic Places. Dean’s was established by Benjamin and Mary Rose Dean, in 1956, and is Oregon’s longest-running, continuously Black-owned business. It continues to be a community anchor in Northeast Portland, and Commissioner Jayapal was delighted to join Dean family members from Portland and across the country in celebrating this honor.

In August, Commissioner Jayapal spoke to youth at Neighbors for Clean Air’s Camp “AQ” in Cully — a neighborhood experiencing poor air quality due to its close proximity to a number of pollution sources. She discussed the County’s role in improving clean air, and her work  on restricting toxic wood smoke and diesel pollution. The Multnomah Youth Commission (MYC) joined her in presenting youth leadership opportunities at Multnomah County. The same week, she toured Rivergate Industrial Park with Port of Portland where Terminal 4,  Terminal 5, and Terminal 6 operate. The Port of Portland is one of the largest employers and landowners in District 2 and a major driver for our local and state economy.

Reflecting her view that it’s essential we develop a wide range of housing options as quickly as possible, Commissioner Jayapal visited new transitional housing projects developed by partners including Catholic Charities and the Salvation Army, and also toured a downtown office building that could potentially be converted into housing.

In the final days of summer Commissioner Jayapal helped prepare for the back-to-school season by joining families and community members for Portland Public Schools Community Care Day at Dr. Martin Luther King, Jr. Elementary School. She helped beautify and restore the schoolground, and had informative conversations with her constituents. 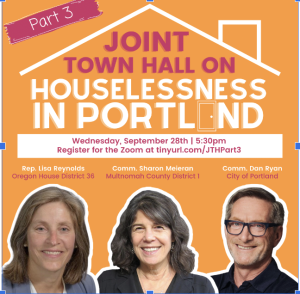 On Sept. 28th, Commissioner Meieran will participate in a third joint town hall in partnership with State Representative Lisa Reynold (HD 36) and Portland City Commissioner Dan Ryan. They will discuss houselessness in Portland, including efforts at the state, county, and city levels to address the crisis, and answering your questions. You can register here for the event.