Former Congresswoman Gabrielle Giffords called on local and state officials and civic leaders to come together to think up bold and courageous ways to stop gun violence in Oregon.

Giffords was in Portland on Feb. 19 to launch the Oregon Coalition for Common Sense, a coalition that will urge state lawmakers to find “common sense solutions” to gun violence.

Oregon, for instance, does not require guns to be safely stored to prevent children and other unintended users from accessing them. The state also does not have a clear process for families and law enforcement to prevent people experiencing a mental health crisis from gaining access to firearms.

Giffords represented Arizona’s 8th congressional district in the U.S. House of Representatives from 2007 until she resigned in 2012 after being shot in the head while meeting with constituents in a Tucson suburb in 2011. Six people were killed in the attack. Giffords suffered a severe brain injury.

“Stopping gun violence takes courage. The courage to do right. The courage of new ideas,” Giffords said. “I’ve seen courage when my life was on the line. Now is the time to come together. Democrats, Republicans, everyone. We must never stop fighting.”

Giffords and her husband, retired NASA astronaut and U.S. Navy Capt. Mark Kelly, now lead Americans for Responsible Solutions, an advocacy organization that works to promote solutions to gun violence, such as closing transfer loopholes that allow felons, domestic abusers, and the dangerously mentally ill to access firearms; and strengthening the federal background checks system by including state records.

“It shouldn’t be about pro-gun or anti-gun,” said Peter Ambler, the organization’s executive director. “It should be about protecting the rights and traditions of responsible, law-abiding individuals.”

As part of the launch of the Oregon initiative, Giffords hosted a roundtable discussion at the YWCA of Greater Portland Friday. The discussion was moderated by Multnomah County Chair Deborah Kafoury.

In addition to Giffords, the panel included Ron Louie, retired Chief of the Hillsboro Police Department, Keri Moran-Kuhn, associate director of the Oregon Coalition Against Domestic and Sexual Violence, Jessica Nischik-Long, executive director of the Oregon Public Health Association; Michael Reese, retired Chief of the Portland Police Bureau; Dr. Jim Scott, past president of the National Physicians Alliance; Susan Stoltenberg, executive director of the YWCA of Greater Portland; Multnomah County District Attorney Rod Underhill; U.S. Attorney for the District of Oregon Billy Williams; and Robert Yuille, a veteran and member of the board of Gun Owners for Responsible Ownership.

The panel told Giffords of challenges the state faces in reducing gun violence. 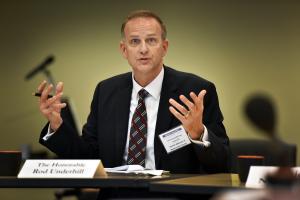 Stoltenberg said gaps in the state law continue to put children who live in homes with guns at risk of not just violence and death, but also psychological trauma.

“Too often, children -- while they may not be the ones shot  -- have witnessed that. ...Although we don’t treat them as a victim, they really are and that has a traumatic effect for a long time,”  Nischik-Long said. “We only see the immediate impact of the gunshot wound. We don’t see and address the social consequence that is long lasting.”

Moran-Kuhn said firearms continue to be a tool of perpetrators of domestic violence. The Oregon Coalition Against Domestic and Sexual Violence is supporting a bill this legislative session that, if passed into law, would delay the sale of firearms until background checks are completed.

Because of its broad reach, Nischik-Long called gun violence a public health crisis. She urged research into gun violence prevention strategies, much like the work that goes into preventing other major public health issues, like tobacco use, motor vehicle safety and unintentional poisoning. Such research has so far been limited by a lack of funding, Nischik-Long said.

Other panelists urged research into laws and policies that would attack gun violence by considering the role substance abuse, mental health and economic disparity play in gun crimes. 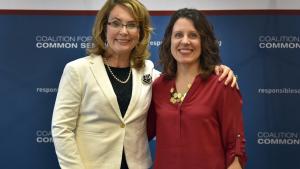 The discussion did include some hopeful points. Underhill praised Multnomah County’s program that provides funding to law enforcement officers to make sure that people who are prohibited from having guns because of a restraining order, don't actually have guns.The officers ensure those people surrender their weapons.

“We know that this is an issue that affects everyone,” Kafoury said. “We look forward to taking some of the lessons that we’ve learned today about how we can make some common sense changes to our legislators in Salem.”