December 11, 2020
Do Good Multnomah staff set up a room at the Portland Value Inn - Barbur, the sixth COVID-19 physical distancing motel shelter.
PORTLAND — In the midst of a massive surge of COVID-19 cases in Multnomah County, the Joint Office of Homeless Services has completed months of work transitioning roughly 300 vulnerable people from congregate shelters to motels where they can safely isolate.

The opening of the Barbur motel marks the final step in what’s been a months-long, all-hands strategic transformation for Portland and Multnomah County’s shelter system in the face of COVID-19.

"This pandemic has exposed how tenuous and dangerous life is for people without housing, especially for those whose health makes them even more vulnerable to the worst effects of this virus. The County is committed to doing all we can to protect shelter residents from COVID-19, and we’ve had to take extraordinary measures to do it, but for those hundreds of guests in six motels, it is undoubtedly worth the effort," said County Chair Deborah Kafoury, who led the push to use motels as high-risk shelters. "We will never stop creating ways to support those who are living outside, through this pandemic and beyond."

The Joint Office, with Public Health and Multnomah County’s Emergency Operations Center, worked aggressively to space out shelters early in the pandemic — to preserve year-round shelter beds and avoid having to put people back out on the street.

In March, those teams moved beds to unoccupied buildings like the Oregon Convention Center and three City of Portland community centers. They enacted other COVID-19 changes, requiring face coverings while creating stricter hygiene and sanitation protocols

Then in June — looking ahead to a time like now when COVID-19 might spread uncontrolled in the community — the Joint Office and the Emergency Operations Center began moving beds from those temporary spaces to longer-term motels that offered additional protection.

The motels are providing better isolation for people in shelter assessed as having the highest-risk of COVID-19 complications, including death. Risk factors include age, health conditions and being part of disparately affected communities, including communities of color.

The transition also offered another dividend. Because temporary spaces like the community centers were no longer needed to host year-round beds, the Joint Office was able to use two of those facilities — Mt. Scott and Charles Jordan — as seasonal shelters this winter.

“As we face down another surge in the COVID-19 pandemic, I am glad to see this sixth high-risk motel shelter open and providing safe and essential shelter for some of our most vulnerable neighbors,” said City Commissioner Dan Ryan. “I am grateful to the amazing work of the Joint Office of Homeless Services in responding to this crisis, and look forward to further developments on this front.”

But they provide the same suite of services as traditional shelters: housing navigation, meals, health support, and access to counseling and substance use treatment, among other things. They can also accommodate couples and pets, and personal belongings, just like traditional shelters do.

The Joint Office leases out all of the rooms at the motels, and pays expert nonprofit housing and shelter providers to staff and provide services at the sites. 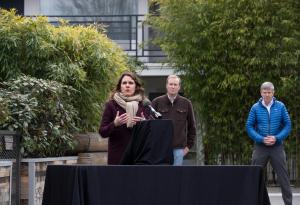 Chair Deborah Kafoury announces a partnership with the Jupiter Hotel for use as a temporary space to spread existing shelter beds on March 26, 2020.
Those “voluntary isolation” motels — including the Jupiter Hotel near the central eastside — serve people from shelters or crowded housing situations who have COVID-19 symptoms or who need a place to quarantine while awaiting test results.

That means there are roughly 400 rooms in eight motels available for people experiencing homelessness.

The Joint Office is also supplying community partners and volunteers with life-saving gear to share with people in camps, including more than 110,000 masks and hundreds of gallons of sanitizer and water.

To learn more about work by the Joint Office, Multnomah County and the City of Portland to help people experiencing homelessness find shelter, safety and support during the COVID-19 emergency, go to ahomeforeveryone.net/covid-homelessness.