In the days before Michael Bowen was found dead on Nov. 19, 2020, the rain fell steadily, and temperatures hovered in the 40s overnight. At some point in those few days, Michael had laid down below the open sky, on a patch of dirt between the East Bank Esplanade and Interstate 5. He rested a hand on his chest. And there he died.

Bowen left behind three children, an ex-wife and two adoptive parents who loved him. He was 46. 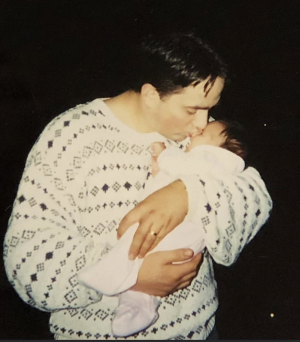 Michael Bowen with his baby daughter

“This is a man who was broken by life,” his ex-wife, Amy Bowen, said. “The officer told me it was peaceful, that he laid down and went to sleep. And I took comfort in that.”

Michael survived a traumatic childhood before he was adopted at age 12 by a family in Aloha. He graduated from high school, then community college. When he was 21, he met Amy.

“He was loving and charming and kind,” she said. The couple married and soon welcomed a baby girl to their family. Shortly before the girl’s first birthday, however, Michael came home with divorce papers.

“Marriage is not for me,” Amy recalled him saying. He told her he had been cheating on her. “I didn’t see it coming,” she said.

Michael had two more children with different partners. But because he struggled to hold down a job, he couldn’t pay child support.

“He died owing me a lot of money,” Amy said, without animosity. She wasn’t angry with Michael — in fact, she hadn't ever expected him to pay. All she had asked of him — hoped for him — was that he could know their daughter.

Amy’s life had turned out well after the divorce, and she could afford to be generous. She went back to college, secured a good job, and fell in love with a man who loved their daughter and who supported her effort to keep Michael in their life.

“He cut everyone out of his life, but never cut me out. I think he knows I loved and accepted him even if he hurt me,” Amy said. “I knew he was broken and, while he made his choices, on some level he couldn’t help it.”

In 2018, and again in 2019, Michael was picked up for failing to pay child support. When he didn’t show up for court, warrants were issued for his arrest. A conversation about child support was among the last interactions he and Amy had.

And yet when Amy learned that he was homeless, she and her husband asked him to move in. Their daughter had gone to college, and he could stay in her room, get back on his feet, they suggested But Michael assured them he would be OK.

Michael had no history of drug use, no diagnosed mental illness. No criminal history. But he was haunted by something, Amy said, and he couldn’t shake his ghosts.

“He had moments of love and joy in his life,” Amy said. “But also a lot of pain and suffering.”