An ambulance dropped Ryan Homsley at a local emergency room on the evening of Nov. 6, 2020. He was complaining of general pain. But without an obvious injury, and because staff thought he seemed interested only in a refill of narcotics, Ryan was discharged into what was now a crisp night. He continued to wander the hospital grounds, dancing on the helicopter pad and gyrating along the fence. It rained, and in the early morning the temperature dipped to 36 degrees.

Ryan Homsley died just outside an emergency room, from a combination of methamphetamines and exposure

When a construction worker spotted him at 7 a.m., Ryan was stumbling. After Ryan collapsed into a muddy ditch and stopped moving, the worker flagged down an ambulance. But it was too late. Ryan died from a combination of methamphetamines and hypothermia.

His clothes — two jackets, a long-sleeved shirt, sweatpants, jeans, four socks and sneakers — were soaked through.

Ryan Homsley had struggled for decades with poorly treated diabetes and an addiction to opioids. For a time, he was better known to the public as the Where’s Waldo Bandit, making headlines for holding up banks and promptly being caught.

“I did love him. And it’s sad. But also frustrating,” Noah Homsley said of his brother’s life and death.

Noah can’t recall a time when it didn’t seem like his brother, who was 10 years younger, wasn’t trying to manipulate people to get what he wanted. The brothers were never close, but as younger men they had both moved across the country to Portland — Noah first, and then Ryan — away from their family in South Carolina. 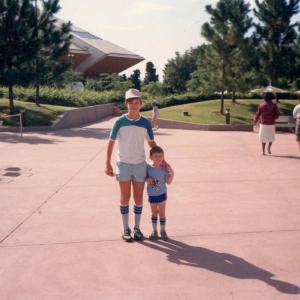 Ryan Homsley, right with his big brother Noah, when they were younger

When Ryan was in his mid 20s, his mother died.

“I didn't notice a problem until after mom died,” said his younger sister, Kelly O'Dowd. “He was married, had a stable job. Then everything crumbled really quickly. He started drinking a lot. His marriage fell apart.”

By the time he moved to Oregon, Ryan had already tried treatment for an addiction to pills and heroin. Noah hoped Ryan would start fresh on the West Coast.

“I had a next-door neighbor with an extra bedroom,” he said. “And Ryan could stay there if he would agree to get a job within a month and be a productive citizen.”

Ryan didn’t pay rent, and he didn’t stay sober, so he was kicked out. Then Noah offered him his family’s basement room, if he would stay sober and be honest. Not long after that, however, Noah and his partner came home from a show at the Doug Fir and discovered their liquor was gone.

Five years after moving to Oregon, Ryan, bespectacled and wearing a striped sweater, walked into a KeyBank branch and asked for cash. Dubbed the Where’s Waldo Bandit, he was arrested three days later, after bragging about the crime on social media. He served just under two years in prison. But then, immediately upon release in 2013, he robbed a U.S. Bank branch in downtown Portland. He was arrested two days later and sentenced to five years in prison.

When he was released, Ryan seemed to make a real effort to stay sober. He secured sober housing and began receiving disability payments for his diabetes, payments that would cover life’s bare essentials. Noah encouraged him to spend time downtown and sketch people for some extra cash.

“I think he really tried,” Noah said. “I had conversations with him. I thought he was on his way to doing well.” 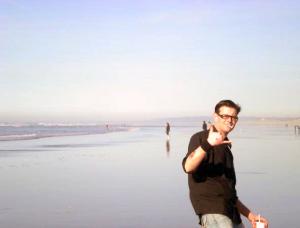 Ryan Homsley at the Oregon coast

His sister sent him money for as long as she could, but in late 2019, Kelly had to cut him off. He blew up at her and said some horrible things. It was one of the last interactions they had.

“I loved Ryan and I wanted him to do well,” Kelly said. “But you can’t help someone who doesn’t want to be helped.”

In the late summer of 2020, Noah heard Ryan failed a urine test and was going to lose his housing. A few weeks later, Ryan tried calling from a hospital, but the call cut short. Noah had no way of finding out where his brother was or how to reach him.

A couple of months later, Noah got the call that Ryan had died. And after so many years of struggling with his brother, Noah had a hard time feeling anything but anger. Again it was Noah who picked up the pieces, and all of the business that comes with death—funeral arrangements, cremation, filing for a death certificate, and finally, receiving the medical examiner’s toxicology results, which confirmed the cause of death: hypothermia and methamphetamines.

“It was shocking to me. All this time he never alluded to meth. It was always downers. Oxycontin. Heroin,” Noah said. But then Noah considered meth’s ability to help keep a person alert.

“If you were sleeping at a bus terminal, would you want to go to sleep?”